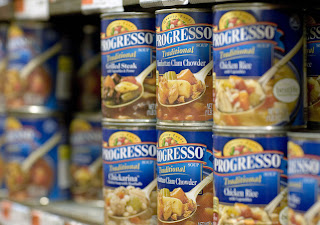 Maybe it’s because the holidays are over, or maybe it’s because it’s getting bitterly cold out there (as January should be), or maybe people are suffocating from the lack of sun and not getting a sufficient amount vitamin D. Whatever the reason is, I’m noticing a lot of cranky little critters running amuck. I had to take a ride to the grocery store the other day to pick up a few things and the place was just swarming with people. I had to go into the aisle where they had the Progresso soups and wait on a line to just see what was available. There was an employee stocking more onto the shelves while some customers were grabbing what they wanted. One lady grabbed a can of soup, looked at it and then put it back down on a lower shelf. The employee looked at her with such intense rage and screamed, “What the hell are you doing lady? Can’t you see I’m stocking these and you’re placing them in the wrong sections!!!?? Now put that back in its right place! I’m sick and tired of customers not giving a shit!!!” His face went bright red and well, so did hers. He looked like he was actually going to hit her. She was so shocked by his anger that she stared straight at him the whole time she was slowly placing the can of soup in its proper home. She looked scared for her life. Usually I say something to people who are absolutely rude to others, but this guy looked dangerous. He was an employee though! Because I was so upset seeing this woman traumatized by his inexcusable behavior, I got a manager and told him the entire story. I was never one to tattletale, but this was just downright psychotic. He should have been walked out in a straight jacket.

Then I thought about it a bit more while checking out my groceries. It seemed as though all the cashiers and baggers were mentally challenged. The cashier took my credit card and started jumping up and down pointing at my card and then screaming, “Pasquella! Pasquella! Pasquella!” When I looked up and smiled to see why he was doing that, he quickly got distracted and pointed outside and started yelling to his coworker who was bagging my groceries. “Look! Look! The sun is coming out Joe! Look! Look!” Now you may disagree with me or not, but I’m not so sure hiring mentally challenged citizens is a good idea for a major food chain. While I think it’s terrific that they’re out there working (sometimes harder than most people who aren’t mentally challenged), I also think it poses a great non-threatening OR threatening awkwardness or moment that can result in a very ugly scene. For example, the guy in my first paragraph that went absolutely nutty on the woman who put the can of soup it the wrong place - I had no idea he was mentally challenged. He was a nice looking guy in his mid-twenties dressed in khakis and a nice dress shirt with a smock. He didn’t appear to be mentally challenged, but as it turns out, he was. There are no social cues. There are no lines that they can see that shouldn’t be crossed. I used to think it was wonderful for stores to hire them, because it gave them a sense of worth and that people need them. They interact socially and perhaps, gain a better understanding of society. But when does it come to the point where we’re risking other people’s comfort zones and overall safety? Am I way out of line with this?