OWS Leaving NYC in Risk of a Terrorist Attack 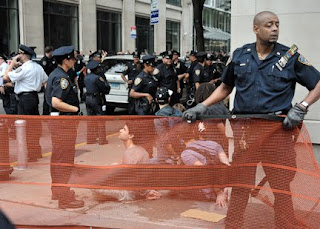 My previous post demonstrates my distaste for protests, but for this particular one, I’m overwhelmed with images, through my own as well as through the eyes of the media and amateur filmmakers on their iPhones. Yesterday afternoon, I posed a question on Occupy Wall Street’s Facebook. I asked, “How can the protesters of Occupy Wall Street be taken seriously when there are too many people there to ruin it for the ones who are serious about it - the ones who actually have a reason for being there?” I then gave them a link to my previous article. Their Facebook wall is so active, that once you post something up there, you’re literally swallowed up by the next angry person. Isn’t that just it though? They seem to be all angry, on either sides - they are fighting amongst themselves, and most of all, they are fighting with the ones who are genuinely asking them questions about it.

Here’s the only response I got, from a lady named Sandi Brockway. She tells me to “educate myself”. I’m sure you’ll get the gist. She posted several messages for me. 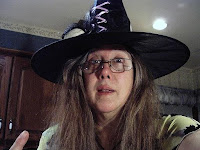 Sandi Brockway: debra, thanks to ronald reagan there are are lots of mentally ill people out in the streets. clearly, that is what your friend enjoys filming. i have been posting the following because there is a much larger issue than exploiting the mentally ill and homeless as you are. You need to educate yourself more than hyou know. the homeless and mentally ill have been a huge huge challenge for this movement. in one city 80% of the participants are homeless. I suggest: I think it time we all become more clear regarding the core priority issues regarding our protests. Why? because a lot of right wing and other conspiracy extremists are beginning to coop our message, such as David Icke, Ron Paul, Alex Jones, etc. Some lead right to neo nazi propaganda regarding the Federal Reserve and Jewish Bankers, some of Hitler's favorite theories. Many of these people are actually trying to convince protesters they are on the wrong path or targeting the wrong solutions. It is clear from reading our draft of grievances and demands, that we have our own pragmatic solutions to our political quandaries and doubts. these other interests are seeking to divide us, misguide us, and dilute our best efforts here, as represented in this draft. 24 minutes ago · Like

Sandi Brockway: I should point out that these right wing conspiracy theories are of the similar kind which people like Buchanan has promoted. 23 minutes ago · Like

Sandi Brockway: they appeal to white supremicist. for instance, Icke, after seducing the New Age Libertarian sorts here, is not the poster child of an australian white supremicsts group. i can also turn you to youtube video, where top neo nazi sorts are owning him, but they just do not think he is as effective as other neo nazi sorts. nonetheless, he sadly bridged gap between pro gun, nazi and new age sorts here with his conspiracy crap. 20 minutes ago · Like

Sandi Brockway: deb, teh fact that these protesters are willing to wade thru this to make their point is actually a testament to their bravery and courage. just because you find a few mentally ill exhibitionists and a small peripheral band of neo nazis who were brought there by right wing conspiracy crap and Ron Paul, means really little compared to large picture. READ THE DECLARATION DRAFT and get clear. 18 minutes ago · Like

And yes, I will admit that my article was a bit intense, but the title itself even said, “The Ugly Side of OWS” - not all sides. I’m trying to understand how anyone can be taken seriously when it’s a three ring circus out there. Like the messages I received from Sandi - everyone is angry and very bitter - and rightfully so. But the thing that gets me is - they’re even fighting amongst one another. For instance, just to give an example - I refuse to go to any (LGBT) gay pride parades simply due to the fact that the ones who are out there topless, making sexual gestures and those who act like complete animals are making us all look bad as we beg for equal rights. Is it all of them? No. But, how can “we” be taken seriously - the ones who are genuinely seeking out equal rights, when right behind us, there are a bunch of barbaric animals having sex in the streets? If you build a forum for a free for all - it’s not going to be heard as well as a group of people in a designated area. With all the technology that we do have, my suggestion would be - bring in the serious ones - the ones who are legit with real issues and send them to a place where they can protest. Film it. Get Michael Moore if you can. Do whatever it takes to make them see you as human beings, not chaotic drug addicts looking for an opportunity to party. Hold a protest in a confined area: in your home, in a hall, in a place where it can be filmed and people can actually be interviewed one by one. I know it takes away from the entire concept of “occupying” Wall Street, but now these concerned citizens are sharing the streets with racists, drug addicts, the mentally ill, homeless people, drunks, topless women (yes, for some that’s a ‘perk’ if you will), and people who really don’t care at all. You have the means to get your message out there. Use them.

I nodded my head, agreeing with every single reason why you are brave enough to be out there. I just wish you had better solutions to create a more peaceful environment. 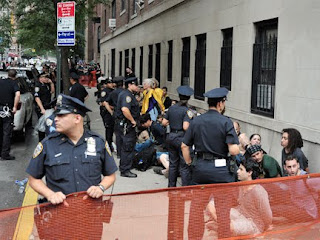 A message for Sandi: The fact of the matter is, NYC is a mess. It’s unsanitary, it’s dangerous, it's violent and there is much more crime being committed. Not only that, but you are taking away our law enforcement - our protection against NYC being attacked by terrorists. You are making New York City unsafe for the rest of us. It’s not only inconsiderate, but it’s selfish, it’s dangerous, and I’ll even go as far to say that it’s stupid to leave New York with less police to patrol our area in case we do get a terrorist attack. You don’t care though. We all care about the issues above, but keep in mind what you’re really doing. Keep in mind how crucial it is to have as many law enforcement officers on the street, instead of fighting off rebellious protesters and getting injured on top of that. There are more important issues, but you fail to see it because you’re all like sheep. Just roam with the herd and don’t look back. Meanwhile, and God forbid, the city that you love so much will be in ruins because the police had no control over the mass destruction terrorism took over, because they too saw an opportunity to wreak havoc. Educate yourself more on that please.
For more of Deb's articles, please visit: www.debrapasquella.com
crime at Occupy Wall Street Debra Pasquella OWS Sandi Brockway terrorism