Is October 21rst the End of the World? 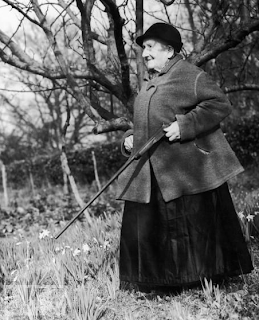 Last night, Mad and I were watching The Stand by Stephen King. We thought it was just one movie until we realized at 10pm, that the movie would end at around 2am. It was a mini series unfortunately, but very interesting. It even reminded me of that movie 28 Days Later somewhat, with that panicky ‘end of days’ type of feel. It’s a post-apocalyptic horror flick that leaves you wondering what you would do in a situation like that. In this case, a flu virus spread quickly, yet only a few were immune to it. (You know how these story lines go.) Anyway, this morning Mad and I were discussing it and what we would do if that should ever happen while we’re still alive. Mad quickly said, “Well I would grab everything just to have my family survive.” I said, “So would everyone else." It’s not like a half off sale at Macy’s where you have a spat with the woman trying to buy the same dress. This person will literally kill you for it.” (Not the dress, however more like for a few cans of food perhaps.) For me, just give me a sawed off shotgun, a semi automatic with a massive amount of bullets and I will live out in the mountains hunting deer and protect my family from whoever tries to hunt us down. But realistically, I would never want to live in a post-apocalyptic world. I’d rather not survive a nuclear war instead of waiting for a virus that would eventually come floating my way. 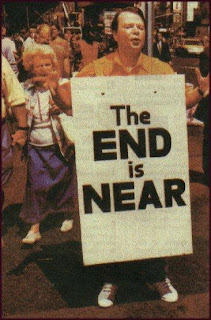 Here’s what really gets me. The churches and their years and years of chanting to people that the end is near is almost enough to turn to atheism. Most of this apocalypse stuff generates from the mouths of religious folks who like to put the fear of God into people. Every time I have attended church services, it would always come up. Even when we were first at war with Iraq, they said, “See? It’s already happening. The end is near, be prepared!!!” Yes, be prepared, but let’s not panic people into throwing their life savings into the tithing basket so they feel closer to heaven - let’s be realistic. Be prepared to step out of church and possibly have a heart attack. Be prepared for tomorrow’s commute to work. Be prepared when you hop onto your flight for vacation. Be prepared to just “be”. Remember that quack Harold Camping who said that it would be the end of the world - a zombie apocalypse on May 21rst? They even gave the exact time, I believe it was at 6pm. The minute before “doomsday”, I stepped outside onto my deck and waited...and waited...and waited. I went to look on Twitter and found that Iceland was having mini earthquakes and a volcano that had erupted, so people took that and said, “Look! It’s happening in Iceland first!” 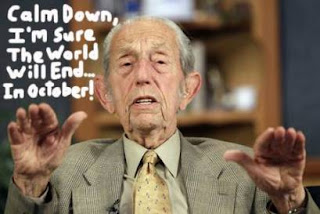 So now, they have a ‘logical’ answer for why we’re still here after May 21rst. On May 21st, Judgment Day "began" the rapture (the taking up into heaven of God’s elect people) occurred at the end of the 23-year great tribulation. On October 21st, the world will be destroyed by fire (7000 years from the flood; 13,023 years from creation). So basically, it means that May 21rst was the spark of something yet to come, not doomsday per se. I wonder what will happen come October 22nd when we’re all asking, “So what’s the next ‘logical’ answer for why we’re still here?” I’m trying my best not to seem judgmental when I say I don’t want to attend church with a bunch of crazy, freaked out religious people telling me it’s the end of the world all the time. What a downer. I’d rather pray in private and have my own relationship with God and leave the crazy religious freaks out of it. If it’s your time - it’s your time. There’s no stopping what fate has in store for you. Anything, anywhere can happen at any given moment, so why scare people including yourself over this “zombie apocalypse”? Maybe if we sprinkle a little Lithium in the communion wine, it’ll help society feel safer.

For more of Deb's articles, please visit: www.debrapasquella.com
at October 03, 2011