Occupy Your Time: The Ugly Side of OWS 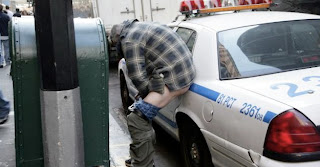 This has to be the most confusing protest of all time. I have never once seen a protest that had numerous and varied reasons, some irrational. I would have total respect for these Occupy Wall Street protesters if they were calm; if they protested and had a logical explanation (or at least one strong reason) of ‘why’ they’re out there, and if they conducted themselves like human beings. The sad truth is that most of them are acting like complete animals. It’s barbaric, unsanitary and dangerous. Corporate greed is one reason. Yes, protest! Bailing out banks who didn’t deserve it while many citizens are out there struggling to pay off their debts - yes, protest! But when does it become irrational? One girl who was interviewed said, “I would like all my student loans to be paid off.” ...Really? Many people cannot give you an actual reason without skirting around trying to hide their stupidity with big words they learned the night before by their “leader” of the pack. It’s getting uglier and uglier. People are defecating in tupperware and washing themselves in spaghetti bowls, and some are urinating right outside on the streets. There are drugs, crime and a prime opportunity to hurt our law enforcement who are trying to keep people safe. There is racism, anti-semitism and hatred amongst one another. It has become a chaotic scene. Watch this video below as this young man foams at the mouth with the most hateful anti-semitism while ‘trying’ to make his point. Once you become hateful, hurtful and rude, your point is invalid. 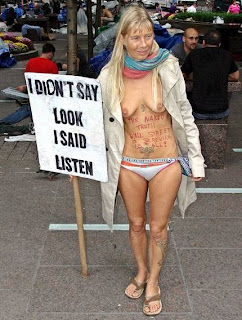 Then you have these hippy-types that come out protesting just for the opportunity just to go topless. There is no rhyme or reason other than being rebellious. To tell you the truth, much of the scene reminds me of when you walk inside an Italian deli, there are tons of sausages dangling down from the ceiling. Not an appealing look, but something that’ll get your attention nonetheless. My problem with these types of people is that they’re making the ‘logical protesters’ look like a bunch of idiots. One bad seed ruins it for the rest of them and I know there are some decent people out there doing their best to have a calm and peaceful protest. Then you have this scene. The video below shows you how classless this protest is.

I’m so glad many of my fellow amateur filmmakers are out there interviewing them. Brave as they are, they have been getting some hilarious reasons, if not, incomprehensible to say the least. As you watch this next video, you’ll see the many contradictory reasons of why they’re there. One person claims how he loves Obama and how he’s doing a terrific job, yet he’s out there because of Obama. Wha? You’ll also see how the homeless people are mocking the protesters, and rightfully so, saying when the first wind hits, they’ll be out of here. I wonder how they’ll do with this upcoming storm. God works in mysterious ways, doesn’t he?
If you cannot view this video, please click here.

I also want to point out that by no means am I even close to being "rich" or "well to do" -- I'm struggling just as much as these protesters are. In fact, when the protest was peaceful in the beginning, I was thinking about going down there to show my support and to film some of the people who were passionate about the issue(s). When protests get ugly, bringing in the riff raff --- my protest will then be at home watching the chaos go down - watching these people not be taken seriously. When you act like animals, nothing gets done. You're seen as a side show circus. Occupy your time and go home.