The Naked Jester: Life of an Aspiring Comedian 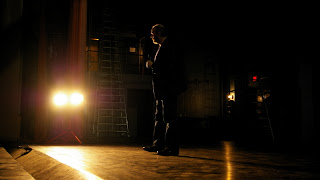 Jared, the aspiring and well loved comedian starts fussing with his hair before he walks out on stage. He checks to see if his buttons on his shirt are all alined. He tucks it in, flattens it out near his chest and fixes his slightly wrinkled pants since he’s been sitting in a car for five hours just to do a show for mere exposure. There’s usually no pay, there’s no reward other than perhaps a free drink and huge ego boost generated from the howls of laughter being heard amongst the audience. “What if there’s no laughter? What if people stare at me, hoping that I would stage left?” he says to himself as he stares at the very sad aspiring comedian in the mirror. His heart begins to pound. It’s a new city, new people, new stage, new attitudes. His insecurity starts overwhelming him as he feels his throat closing up a bit. He shakes his arms out to relieve the tension - it’s his technique to ‘shake it out’ - get rid of the static he says. Beads of sweat start to form above his upper lip and his hands start to sweat, enough to smudge the topics on his left hand, his cliff notes if you will.

“5 minutes bro,” the announcer says to him behind the stage. He’s never been to a “real” stage before, other than doing open mic nights at some dinky bar with only strands of cabaret tinsel as a curtain, the ones usually seen in campy lip syncing drag queen shows. This felt real. “This could be it! Someone may finally notice me for once and give me my own show, or at least hire me as a cohost.” he mumbles to himself as his nerves begin to buckle up within. “All the late nights of trying to desperately make people laugh. All the nights where no one even made a sound. All the nights where I just wanted to cry on stage and say, ‘Help me! I hate this! This is not who I am!’” he thought to himself, making his entire gait weak, fragile, insecure, small, hunched over...real.

As Jared hears the final “Thank you very much, you’ve been a great audience” coming from the other comedian out on stage, he knows the announcer is ready to call him up. His breathing becomes shallow as he starts to get tunnel vision. He waits patiently near the side as the announcer starts talking to the crowd, setting Jared up with a major intro, possibly giving the audience too much of a high expectation. This makes him even more nervous. It would have been much easier to walk out if the announcer introduced him as “Not a very good comedian, but give it up for Jared anyway!” This was too much. “The very funny” part didn’t sit well with him for some reason. He didn’t want to live up to that high standard. Then he heard it, “Please give a warm welcome for the very funny...Jared!!!”

As he walks out toward the stage where the microphone is, the first thought in his mind is, “I hope I don’t have trouble taking the mic off the stand.” He hears everyone clapping, smiling...expecting a great delivery. And in an instant, Jared becomes numb. All the feelings of anxiety, insecurities and self-loathing have swept itself off the stage. Now, it was “Jared the Jester” - not Jared, the former accountant just wanting to get out of the corporate world. Not the same Jared who cries every night over the many rejections he receives from women of interest. This was “Confident, funny, charming Jared who made everyone laugh” - this was a total different person. Not the same guy who cried for hours the night before thinking his life was completely worthless because nobody paid him to make people laugh, but the Jared that is unstoppable - the Jared that can make you literally pee your pants! The crowd starts laughing at every single word out of his mouth. Tears of laughter are streaming from even the toughest cliques standing around trying not to let out a chuckle. He has succeeded. Mission accomplished. He left that insecure wimp backstage. The hell with him - he won’t get Jared anywhere. The confident, strong and hilarious Jared will take him to new levels of his career. And the voice inside Jared now screams, “They love me, they really really love me! I am that funny.”

As Jared leaves the comedy club, he’s filled with a tremendous amount of relief. He’s satisfied with his performance. He walks into his small studio apartment, grabs a beer out of the fridge and sits his on his sofa, exhausted from the night’s turbulence of emotions. He then realizes no one’s calling him. No one waits for him when he gets home. None of his family is in the city because they prefer the suburbs. The suburbs don’t have any comedy clubs. There’s no work. This is his life. This is his career. He feels the weight of loneliness, even after he made almost a hundred people laugh all at the same time. Those people had friends, family and significant others to go home with or at least, be able to call. The depression starts to worsen with each minute, each thought, each sip, each slug of his beer. “When will this vicious cycle end? When will it be my turn to make it big? I’m funnier than Daniel Tosh and he has his own show and made it in this biz. What’s wrong with me?”

This is a true story about a friend of mine who recently explained how their life was after the show is over and wanted me to share this with you. Names have been changed of course. The main goal was to bring out the human element - that many comedians have a very different side to them. They can 'turn on' the funny, but some have a very dark side, as many of us do. Kudos to every single comedian out there that have enriched our lives by making us laugh. It's one of the hardest jobs in the world. It's also the best medicine you can possibly give.