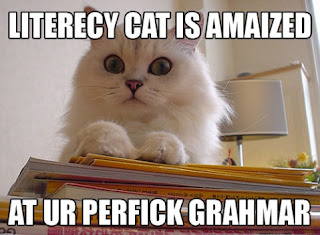 When I first started writing, I had a lot to learn. I still do. There were many twists I had to get around, like the proper uses of "their", "they’re" and "there". My biggest flaw, to which sometimes I still notice I do, is when I use a sentence that includes a plural format, for instance: “There’s pennies on the table”, when it should be, “There ‘are’ pennies on the table.” I blame it on how I talk, because normally, I would say, “There’s pennies on the table.” And sadly, that’s the truth coming straight out of this New Yawka’s mouth. I even have someone go over my writing just in case my New York way of talking gets a bit too loose. And that’s another one: “loose”, “lose”. Gah! One of my worst pet peeves now. Whenever I see someone make this mistake, I cringe. Then again, I remember in the past someone else pointing this mistake out to me as well. You might even see a few typos and incorrect sentence structures - so let me know - in private please. To be honest, when I read an article or blog that has a few of these kinds of typos, I don’t really mind because if they’re (they are) a good writer in general and a good story teller, the writer has my attention anyway. I remember someone saying that in order to be a good writer, you also have to be an avid reader, or somewhat close at least. For instance, I’m a guitarist. If I don’t watch and listen to someone else play, my inspiration goes down the tubes and I never learn anything new. I believe there is a lot of truth in that. 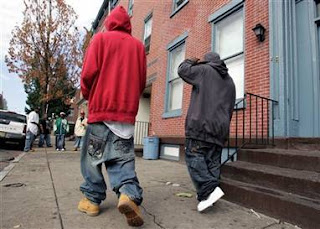 There seems to be trend in part of our society that totally demolishes the English language altogether, for sake of being “cool” or not being so goddamn anglo. The ‘proper’ use of the English language is seen as nerdy and well...white. This morning, I logged into my Twitter account to find “#wtfwasyouthinking” as a trending topic. In my mind, all I could see was some hoodrat with his baggy jeans down to his knees with his tighty whities showing. Kudos to those who tweeted to correct these punks. “What the f*** was you thinking” sounds like an uneducated moron. It’s worse than “You ‘is’ so beautiful.” Or even “You right” - leaving out the middle guy, whose (or who's?) name happens to be “are”. I’m not an English teacher, but I cringe cringe cringe every time I see somebody write it out on ‘paper’ -- but oddly enough, if I hear it being spoken in moderate amounts, I’m not at all bothered. Strange, right? I can understand this because in the past, I used to write much different than the way I spoke in person. I wanted to use fifty cent words and be a little more proper. It just wasn’t me. I wanted to write the way I talked. I refrain from my ‘ultra loose’ socializing lingo for sake of losing (not loosing) a few readers, but what you see is basically what you get.

Which brings me to why I believe some people annihilate the English language. This may be the one paragraph I may regret writing, so bear with me. This is not meant to offend. I’m just trying to figure out a reason for its madness. Many southerners and as well as urban cultures and black people have adopted this method of speaking. Even my own family has given the English language a whole new meaning... 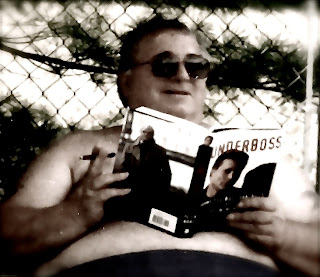 In Wikipedia, you can read the entire explanation which is pretty interesting. What may be ‘proper’ for white people may not be proper for others only because white people were the ones who created the English language. For instance, “He been working” as opposed to, “He has been working.” Either letters are left out or simply replaced with an improper word. Let’s even take this a step further. My father. He has completely demolished the English language as well. His thick Italian/New York accent and lack of proper usage is your stereotypical Brooklynite. Anyone would know where he’s from right when he opens his mouth, ie: “Yous need to know sumptin. Dat’ watchyamacallit was out in ya mudda’s garden again and ate all da’ flouwez’. Whaddya’ gonna do when dat goddamn sonnovabitch’ eats da’ tomatez’? Fuggedaboudit!” My mother isn’t as bad, but she’ll say “windiz” instead of "windows". She’ll occasionally use my grandmother’s English and say, “berl the water” instead of “boil the water”. So in my overall personal opinion, it all comes down to what you were brought up on. Your environment has everything to do with it. I recall a summer I spent with my cousins over in Staten Island. There wasn’t one proper usage of the English language whatsoever, and when I returned home, I started tawkin’ like dis & askin’ for cawfee and really botching up that beautiful language that every nationality has seemed to tinker with on its own.

We are a product of our environment whether we like it or not, but we can change it, learn it over again, only if that’s what the person wants to do. I had to because no one woulduv’ read me tawkin’ and writin’ like dis or mispelling “loose” to “lose” or “they’re” for “their” and “you is” opposed to “you are”. You would have stabbed me in the eye with your red pen.

For more of Deb's articles, please visit: www.debrapasquella.com
at August 11, 2011