For Sale: One Pesky Ghost. Inquire Within.

Since last year, there have been renovations done to our place as well as our own little tweaks here and there since March. It’s been nonstop but the place panned out nicely. We’re finally able to rest...so we thought. I was advised not to tell anybody about this, but since it’s not only myself who witnesses these ‘happenings’ in this house, I have to voice it out there. Lately, the house feels “interrupted”. I know, wtf are you talking about, right? Well, I chucked it up to a lot of other things that it could have been, but not anymore. It’s too much. Being that my wife and I are Christians, we don’t like to communicate with any other spiritual source other than God Himself, but there is someone here trying to get our attention-----desperately. Again, I’m grateful I’m not the only one who hears and sees what’s going on. It makes me comfortable describing these stories detail by detail.

Before we moved in, we were in the house ripping up carpets and removing the tacks. I twas a tedious and long job. Mad turned around and asked, “Why are you laughing?” Keep in mind I’m all the way across the living room from her. “I’m not laughing,” I said, thinking she was just fatigued. “I heard someone giggle in my ear.” After we removed the carpet to expose the hard wood floors, we had a gentleman come in to sand and polyurethane the floors. As he was working in the studio/office, the fire alarm started going off. We told him to temporarily take out the battery. Then he went to do the living room and the fire alarm went off in there as well. No big deal - old alarms - new batteries - must be a glitch sort of thing. Debunked. Any time a handyman came in to repair something, their power tools that were charged drain instantly. This happened a few times. No big deal. Just crappy equipment? 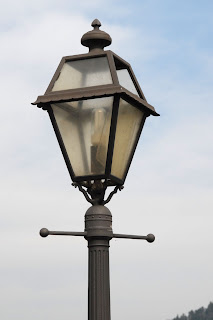 There are tall London-like street lamps outside. We were told they’ve been broken for years now. As I was washing the dishes, staring outside, I said, “I wish those lights worked.” Voila - they turned on. Coincidence? Who knows. But any time I really need this light to be on, it goes on. Otherwise, the lamp is always off. You’re probably saying, “No big deal - an electrical problem.” I’m lying down on the couch the other night watching a movie with Madelene, when I feel someone tap me four times --hard. Nobody there. The next morning, I’m working in my living room because we’re still getting the office prepared. I’m the only one in the house and I hear someone say very lightly, “Deb?” It sounded as though the lady didn’t want to disturb me, but she really needed to ask me something. I stopped dead in my tracks. The next day, Madelene and I were on the hammock relaxing when a woman, probably late 70's or 80's peeks out of the screen door. I didn't say anything, hoping Mad would. And she did. "Who was that?" I then knew if I was going crazy, so was she.

Two nights ago, I had really bad insomnia so I went out into the office to do a few things. Not too long after, I hear someone changing a radio tuner frantically with that a.m. squeal. It then tuned into 30’s music and the volume kept going up and up until I was like, “Mad, what the hell are you watching?” But, it wasn’t coming from the bedroom. It was coming from the downstairs living room. I snuck downstairs very slowly, listening to this circus-like music from the 30’s and as I got closer, the volume went down. The radio was not on. As I went to go back to sleep, someone was walking from my kitchen area into the living room. We heard the footsteps loud and clear because there is one part of the floor that really creaks. It sounded like a person carrying in dishes. We heard the person put down whatever they had onto the kitchen counter. Then it was silent. I sat straight up in my bed and turned the lights on. As I sat there, I noticed a black shadowy figure that flew against the wall and out into the corner. 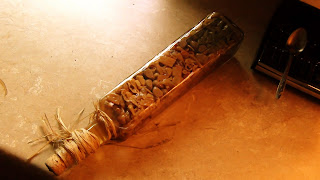 Yesterday, as I was preparing dinner for Madelene, I noticed a wooden spoon missing that my grandmother would use religiously which we kept on the wall. Mad didn’t touch it and I know I didn’t touch it either. We found it moments later. It was placed nice and neatly in the pile of spoons in the drawer of the island in the kitchen. I then went to go sit outside on the deck for a few minutes waiting for our food to cook, and I hear a huge bang. I came back inside and on the kitchen counter was my 10 lb bottle of decorative olive oil, garlic and chili peppers tipped over. It wasn’t near a window and nobody was in the kitchen. I then got very frustrated because my nervous system is shot. I said out loud, “What is it??? Go away!” And for the most part, it did...for now. I have a couple of ghost hunting groups that are anxious to get into the house to check it out. I’m really hoping they can debunk whatever it is, but from the looks of it, my attention is desperately needed. It won’t let me sleep. As soon as I sleep, either something goes “bang” or someone taps me and sometimes, the sounds of footsteps are enough to keep my eyes open all night long. I have so many more stories but you get the gist.

I know I’m already off my rocker, but what do you think? Have you ever experienced anything like this? Do you believe in this stuff? And if you have experienced it, what did you do? I have a friend suggesting that I talk to it, but I don’t believe it’s a good thing to talk to outside spirits only because any demonic entity can ‘hack’ into your conversation or pretend to be who you want it to be - like a past relative or friend. They can play on your vulnerabilities and make you think you’re talking to someone you love. Instead, I’ve been praying to God that whoever this may be has peace and that they see the light. Or maybe I just need a good electrician in here...or a shrink.