Disrespect Comes in All Colors 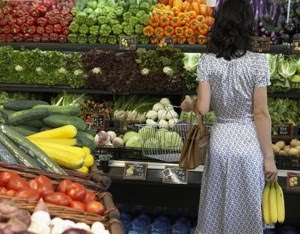 Last night while hanging out talking with my dad, he was telling me something that had taken place at the grocery store earlier that day. Keep in mind that my dad is a very extreme “Archie Bunker” type. Although his talk is louder than his bite, I sometimes cringe when I hear certain things fly out of his mouth. Without giving you every detailed adjective he used to describe the people on the checkout line, I will just give the story to you censored the best I can... While a young attractive white female, maybe in her early 20’s (probably 40’s knowing my father’s eyes) was paying for her groceries, a black gentleman (perhaps not a gentleman), was harassing her, trying to get her phone number, asking her out, touching her groceries to try and help her bag, as she begged him not to. He persisted, and in return, the girl said she was not interested in dating him. He said, “Let me walk you out,” and the girl said, “No, I don’t want you walking me out and I don’t want you to take me out to dinner.” He kept trying to bag her food and she said, “Please sir, stop touching my stuff and let me go.” The cashier knew she was struggling to get away from this guy, but he remained quiet. My dad didn’t say or do anything only because he was very tired and weak due to battling his illness for so long, but in his own words he said, “I wanted to bash my effin’ cane right on his muthaf*ckin’ head - that dirty rat!” (Dirty rat took place of what was really said, which I refuse to write. And yes it was racial.) The cashier was wise, because he kept the man there for "price checks" and gave the girl time to get in her car and get as far away as possible.

After my dad told me this story, he asked me why black men wanted to harass white women so much. I understood his question, but in my opinion, and in my experience, this doesn’t have anything at all to do with race - it has everything to do with not taking ‘no’ for an answer. I then told him a story that happened to me a few months back. I was watching a band play at our local bar. It was one of the first warm nights of the season and everyone was out having a good time. When I went up to the bar to grab the bartender’s attention, I was greeted by a white male, probably in his early 30’s, average, eh wouldn’t look twice kinda guy. He was tough looking only because he had his Harley gear on since he drove up on his bike with his friends. He asked if he could buy me a drink. I thanked him and said, “No thank you, I got this. I appreciate it though.” He then asked me where I was from, what I do, what’s my name, ‘do I come here often’, yada yada yada. The bar was extremely crowded and it seemed like forever until the bartender even noticed me. The guy kept on. Since he really wasn’t getting much of a response from me other than a cold shoulder and most of my back, he started getting more aggressive. A very large black man next to me was eavesdropping the entire time. He glanced over at me and said, “This guy gives you any problems I’mma bust his ass.” And he wasn’t kidding. In fact, I had to turn around and tell the guy, “See this ring? I’m married. My husband is waiting for me over there (pointed to my gay male friend) and I have five kids at home. I am not interested.” Hoping that would drive him far far away, he said, “I’m married too. Let’s meet somewhere.” I was absolutely floored!

When I got back to my friends, he kept staring at me the entire time. My buff black guy at the bar was watching too. When I was leaving, the guy got up to follow me...and so did my big friend. He guarded the door after I left and said to him, “Where you goin’ punk?” After that, I didn’t hear anything else that went on. But thankfully, I was protected by a gentleman. When I explained what happened to my father in this case, he nodded his head and said, “Yeah, I guess you’re right Deb.” His racial slurs simmered down and it looked like he opened his eyes to the fact that disrespect comes in all colors, shapes and sizes.

For more of Deb's articles, please visit: www.debrapasquella.com
at August 13, 2011