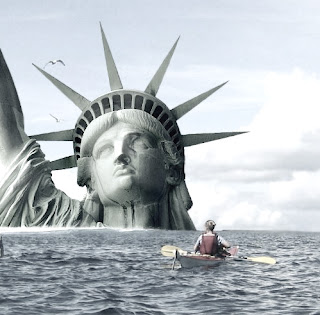 On August 18th, I posted a status on my Facebook wall and also tweeted, “A bird hit my head right when I was opening the door. Tons of birds are flying erratically. I'm predicting an earthquake.” A few days later, what happens? I was quite impressed with my intuitiveness, however I did get a lot of requests for the lotto numbers. Now we’re gearing up for Hurricane Irene, and this is the first time in a decade we have had a storm this large. The news said that NYC would be underwater - meaning 6-12 ft approximately and suggesting ground floor residents to either evacuate in some areas or move to a higher level. What really gets me about both the small earthquake and now the upcoming hurricane are the west coasters. They plastered posts all over calling the east coast “big babies” and telling everyone we haven’t seen anything yet. Can you imagine if Indian Point's nuclear reactors melt down? "Oh c'mon NY, you're a buncha babies! Look at the Fukushima meltdown!" The news may be sensationalizing the hurricane, but it is a serious threat & people who don't live in NY are *again* making fun of our concern. It reminds me of when people in the west coast would even go so far to downgrade the tragedy of 9/11, as though it wasn’t a huge deal. That’s not a blanket statement - I say “some”, only because certain people I knew made it out to be just like an everyday occurrence. Other than the underlining tension that I have noticed between the west coast and east coast, I find they also resent us for not being “as green” as they are. We’re New York. We live in smog. We breathe toxic waste every single day of our lives. NJ is our neighbor. Nuff’ said. But for them to make that broad remark that all of us aren’t concerned about our environment is just plain irritating to me. 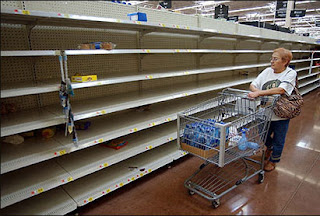 Back to Irene... My biggest concern is the lengthy power outage we’re probably, or most definitely going to experience. We live in a house which has its own well and septic system, so if the power goes out, we have no running water and won’t be able to flush our toilets. We have a few tubs to fill and we bought fifteen gallons of drinking water and canned foods. The grocery store was packed with nervous nellies scrambling around grabbing the last cans of whatever off the shelves. If you stop and just notice some of the people’s behaviors while going to the stores, you can see a little panic in their eyes, because they’re seeing the crowds scrambling around too, which generates more fear - even if it’s a “just in case” type of shopping. It’s cause for alarm. Some people were agitated and others wanted to chitchat about Irene while I just wanted to get the hell out of there and go home to pack up the patio furniture and throw it in the garage. Some of my friends that live around the coastal areas - the dangerous parts that are on voluntary evacuations want to stay till the last minute because they don’t trust the weathermen. All said that they’ve cried wolf one too many times, but what about that one time when it really is something to be concerned about? Remember when stubborn residents wouldn’t leave their homes in New Orleans and were all found on their roofs waving white cloths around for help? 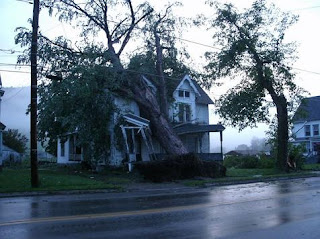 I’m hoping for the best and that everyone is safe wherever they are. For my east coasters, remember to prepare for extended power outages. Buy plenty of batteries for your radios (if you don’t have a radio --buy one!) I know “radio” to our younger generation sounds so ‘1980’, but you really have to prepare for the worst case scenario. Stock up on plenty of water, flashlights, candles, first aid kits, easy to prepare foods, canned foods and even some health/protein drinks for easy storage. I bought a huge case of Ensure just in case it is that bad. Gas up your cars & have at least $100 bucks in your pocket. If you live in flooding zones, make sure that you have your cell phones and any electronics in a ziplock bag so it won’t get wet, in case you have to leave. Charge all your phones, iPods, laptops and other devices so you’ll have them to use while the storm is brewing. Remember, if the cell phone towers go out and we cannot dial out - you can still use text messaging. I found this out from the news this morning. Make sure you text your family and friends that you’re okay. Take photos of any damages to your home. And my personal safety advice - stay away from rooms that are located near a large tree, even if you live more inland. Park your cars away from trees if you can as well. I haven’t seen anyone give that advice to anyone other than the basics of hurricane safety tips. Stay safe everyone & ignore those pesky west coasters!