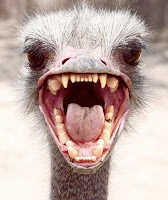 This year has been a brutal one, between the amount of snowfall we got and the below zero temps, it’s making everyone borderline homicidal. People are going absolutely stir crazy and when they do finally get to have a half decent life outside of home or work, they bring all of that negative energy out in the open and spew it out everywhere. Let me explain... Today has been one of the nicest days in. . .geez, I don’t even remember. It hit a whopping 60 degrees. After I finished up work and did things around the house, I stepped outside to visit a couple of friends and picked up a few things from the grocery store. Let me just say that every. single. person I was in contact with today was cranky, rude, mean, nasty, irritable, bitchy and/or whiny. No doubt, this weather can definitely get you down. Even I have been in one of those 'I hate people' moods. I asked one of my nicest friends today if she had that same feeling. She threw her hands down on the counter and said, “Oh my God --YES!” So it’s happening to even the nicest of people. On top of that, it’s a full moon tonight. So not only do you have people coming out of the woodwork from a deep depressive state of cabin fever, but you also have a full moon to kick in the nastiness as well. 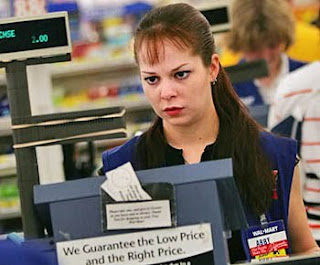 The other day while Madelene and I went to Walmart to putz around and get a few things, we ended up on the dreaded Wally line. The only cashiers up there were nasty, rude nail biting, teenagers. We were wedged in between two cashier stations. The one boy who was working the cash register on the right bent over to pick something up and nearly knocked Madelene over. Madelene, being the nice little angel that she is said, “Oh, pardon me I didn’t see you there,” as if it was her fault. The kid shot her a look and sized her up. That's when my “crazy” kicked in and I said, "Now say you're sorry...NOW." He just stared at me with his mouth wide open. He couldn’t say a thing. The customer’s always right...right? To top that off, our own little snotty, bubble gum poppin' cashier girl was huffin’ & puffin’ ringing us up with an attitude. When it came to signing the credit card receipt, she literally flung the pen and paper at me. “Now say you’re sorry.” She just stared at me in shock. “Say you’re sorry.” She began to stutter and then muttered out, “I-I-I-I’m sorry, ma’am.” I said thank you, and as I was finishing packing what she couldn’t - I said, “And stop calling women ma’am.” I'm sure she badmouthed me to her other coworkers after I left.

There have been a few encounters that I have come across where I just said whatever was on my mind, instead of being a bit more patient and calm, or just simply letting it go. We can blame it on the weather, blame it on the rain, blame it on the snow, blame it on the al-al-al-al-al-alcohol, but never blame it on our own insanity. That would just be crazy.
Be careful out there tonight...
For more of Deb's articles, please visit: www.debrapasquella.com
cabin fever Debra Pasquella full moon mean people Walmart