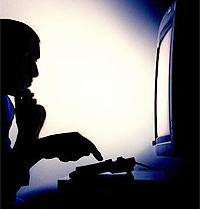 Since 2005, when I first started this blog, a commenter who went under the name/blogger id of “GW Mush” started commenting. His real name is Mark. He was generally polite and very funny at times. I enjoyed his visits and thought nothing of it. Most of his visits revolved around my blog and my fellow writer/friend, Susan’s blog. Susan and I discuss religion, politics along with frustrations of everyday life. I have toned it down a bit during these past couple of years due to a lot of hate mail by other religious zealots regarding my views, beliefs and whatnot. Like clockwork, Mark would comment on both our blogs with either something funny or something with a double meaning, which could have been taken either way. It started to get a bit shady. I’d receive tons of emails from him with photos of flowers, hearts, teddy bears and all of this ‘wishing you a great day’ type of email but with very flirtatious undertones. At one point, I was receiving an email daily, if not twice a day. I thanked him, but it just started to get more creepier as time moved on.

I then started receiving anonymous comments. Some were so perverted that it took me off guard. Of course, having it be under “anonymous” - it could have been anyone, however, with my internet tracking, I kept logging the same ip address at the same times. He’d usually log on around 4:30 am and stay on my blog for hours at a time. A few days after the disgusting comment, Mark, under “GW Mush” left me another comment: “Deb, I have to say even though I’m not into homosexual topics, I really only come here to look at your pic because you’re hot.” I would receive a few more like that, and when it was under “anonymous”, he went a bit further. It would stop for about a month or so, and then he would come back under the same ip address and then say derogatory things about my family and what I had written about in the past regarding what happened when I was sixteen years old. (You can view that here.) He wished us dead - I want to even say it was borderline death threats. My friend Susan received the same disgusting remarks on her blog as well as harassing emails.

I then decided to write a post about the truth of “anonymity” on the internet. Whether you decide to be “anonymous” or not, it’s never a secret if someone wants to investigate further. I then mentioned that if anyone goes under “anonymous”, to please leave a name so I can refer my comment back to them. Then Mark came under the name “Lassie” and started to spew his evilness again. After Mark viewed this blog post of mine, he wrote this email under CleanieTee@aol.com:

Ohhh, that blog tracing thing is interesting. So you always know when its me? How come you forgive me when I say crappy stuff? Do you feel sorry for me or something? hehe I cant remember what I all have said, lol

You know, winter is really beginning to annoy me. Are you doing ok with all the storms the NE is getting?

I guess I like you because I'm a guy and you have so many desirable female characteristics. Like you are extremely beautiful with your long, thick hair and pretty eyes, and I love your accent on the video's. You have a lot of personality too. I skip a lot of your blog though because Im not gay and it doesnt relate to me as much as it does to others who come to your blog for that reason.

Is it immature to sometimes mess with bloggers? I have fun with it sometimes but most of them just ignore me, hehe. OK, thanks for being so beautiful....

Typically, I would ignore all of his comments, but when it started to become routine, I started logging every word, every time stamp and how long he had been on my website. I also noticed that his times are quite unique, unlike most who comment. They were mostly written around 4:30am. I’m not sure what kind of life Mark has, but what would make a person so obsessed with a blogger? Why would you spend your time and energy writing passive-aggressive comments that early in the morning, or maybe in his case, that late at night after a long night of drinking? One can only wonder. His last perverted comment I decided to delete. He then emailed me once again trying to be “funny”, but I emailed him back letting him know that his ip address, visits and comments are all being logged and sent to his local police for harassment. Mysteriously, his blogger id was deleted.

“By the way, I have never been arrested in my life unlike your family members. I will tell the internet cops to compare wrap sheets and we will see who the bad guys are. They even dug up your yard looking for dead bodies and you try to label me as bad for leaving a few comments on blogs, not one comment was ever threatening. You are quite a christan Deb. You should be ashamed of yourself trying to smear me like that when your family are the bad guys.”
By Anonymous on Reality TV: True or Fake? at 4:36 AM

I want to remind Mark of his “wish you & your family were dead” comments were threatening to me. His abusive sexual comments are all logged and yes, very threatening. I do take this seriously and it is already reported. Maybe Mark should start living his life instead of living his life vicariously through other people’s blogs.
In any event, it's good to see the face of Mr. Anonymous/GW Mush/Mark.
To read more of Deb's articles, please visit: www.debrapasquella.com
at February 24, 2011