What a Drama Queen! 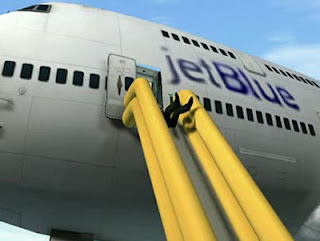 It took this long to figure out that there was no passenger who supposedly assaulted JetBlue’s crybaby, I mean, umm, “hero”, Steven Slater? Other passengers who had witnessed his insanity said the gash on his head was there the entire time even before he boarded the plane. What gets me the most are the people who thought this guy was a hero. I mean...really? A “hero”? For what? Going insane on a plane, screaming on the loud speaker and then grabbing a few brewskies to then hop out of an emergency chute? He acted more like a mentally unstable frat boy than he did a hero. I’m sorry, but from the get go, I thought this story was a bit ‘off’ than what most people had initially thought. “Oh he finally did what we all thought about doing! He’s such a hero!” ...Really? You wanted to go insane too, scream out over the loud speaker in your office and then jump out of an emergency window near your boss’s desk? Hopefully you’ll have some beer on hand. By the time you get down to the first floor, I’m sure they’ll have the mental health team waiting for your arrival.

But, I digress. I get it. I do. I know that we all can feel overwhelmed at times, and yes, it would be so nice of an outlet to say “eff you” to everyone who has ever pissed you off, but in reality, it’s just not realistic if you want to keep your job, your friends & not have your family call the men in white coats on you. Some of us go through nervous breakdowns. “What’s a nervous breakdown?” It can be anything from stressing out so dramatically that you can no longer function in life, to lashing out just like Steven Slater did, even if he still does function in life. Any outrageous behavior like that needs some type of counseling. Was he even offered any professional help? Did he go on medication for this ridiculous scene? They never tell you the ‘mental’ breakdown of what really happened --they only say “he was fed up”. Well, so are most of us----come on! Somehow, he got away with the biggest ‘terror’ scare ever. Think about it: you’re sitting on a plane with all sorts of thoughts in your head. “Will a terrorist hijack the plane? Will the plane go down in the water somewhere? Will I survive this trip? Will someone have a bomb onboard?” Then this dipshit goes insane, instilling more fear than what was initially there from the beginning, and he’s called a hero? A hero??? 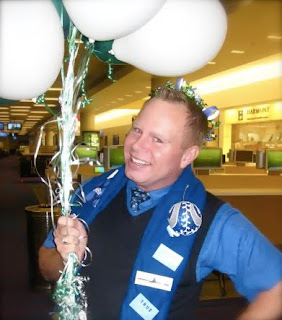 I've always said that people’s true colors come shining through once the real story is finally revealed. And what I mean by that is, people can come across “normal” and calm, when yet there’s so much brewing inside of them. You’ll never know how crazy they are until that one incident that enables them to show their true selves. If a person has that type of instability inside of them, rest assured you will see it if you stick around long enough. These types of people can convince the world that they’re completely sane - ‘they got it together’. They can even go as far as being called intelligent and oh, perhaps even a “hero”. So, now that we know that there was absolutely no passenger to piss Steven Slater off and it was just a matter of a time bomb waiting to go off, is he still considered a hero, or can we now say he went a little nuts that day? I guess it’s safe to say we can all be “heros” from time to time.
Debra Pasquella JetBlue psychiatric care needed Steven Slater