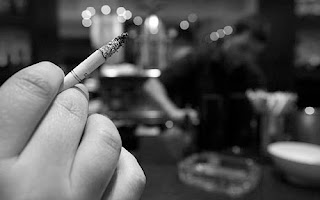 Mayor Bloomberg wants to ban smoking in city parks, beaches and even Times Square. Are you kidding? As a nonsmoker, I have to say this is absolutely ridiculous. If you’re going to ban smoking on NYC streets, please ban all the diesel fueled busses, as well as Hummers and every single oversized SUV out there. That’s worse for your health than a slight breeze of someone’s secondhand smoke. Try putting your mouth around a transit bus exhaust pipe and then take a puff of a cigarette. Which affected you more? Case closed. We’ve eliminated smoking in enclosed spaces like restaurants and bars, etc. That I can understand. I even want to venture to say that people who sit at the bar should be able to smoke if it’s sectioned off and of course, long after dining hours. Come on, smoking goes hand-in-hand with cocktails. There is a few ‘local’ bars that I will not name that bring out the ashtrays after 1am. I think it's great. The smokers don’t have to schlep outside like unwanted patrons just to enjoy a stogie. After dinner, anything “should” go. This is just my personal opinion on this, and I absolutely hate the smell of smoke myself. Fire it up I say... 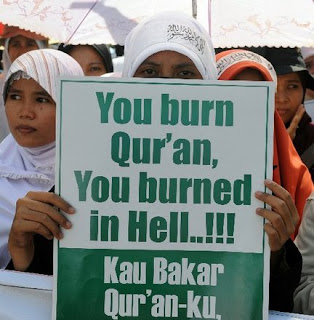 Whatever happened to the first amendment? Did someone delete it? As much as I am against burning any holy book, you have to wonder why our government seems to favor Islam-based countries over their own. Think about it: people of Islam have been burning our flag, our bibles and basically they’d burn us if given the chance. Yes, of course, “extremist types”, but here in the U.S., it seems that our first amendment rights and freedom of speech went down the drain. We all want peace, that’s a given, but when does it come to the point of pulling our pants down just to appease the people of Islam? Many people of different faiths in this country respect Muslims, but the people who are extremists, and of course those who are still very sore about 9/11 should be given a little slack for their emotions. Get this--- in East Lansing, they’re offering a 10K reward for information leading up to the burning of a Quran outside of a city mosque. Really? Seriously? You’re going to waste 10K on information leading up to, umm, the rights of the first amendment? They said no suspect has been identified or "arrested" in this case. Umm, for what---littering? That’s what he did. He littered. He fired up a few pages and left the remains. 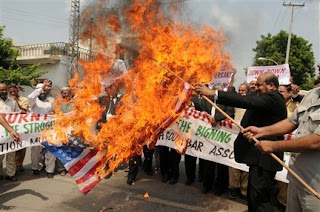 This next story really lights the fire under my ass. A New Jersey train conductor, Derek Fenton was fired from his job because he decided to burn the Quran outside the planned mosque near ground zero on September 11th. He was with his company for 11 years with a very good reputation. Again, although I disagree with the burning of any holy bible, this is not. against. the. law. His first amendment rights have been violated. The company has no right firing him because he didn’t do anything that would be detrimental to his job. Maybe he would have gotten flak when he got back to work, but I think it’s awful that someone would fire him just because of difference of opinions, especially with the high emotions set on September 11th. And let me add another thing to my rage against people ‘outraged’ over U.S. citizens acting out like this: the planned mosque near ground zero is set to open their doors on September 11th of 2011. Coincidence? I think not. After I heard this, I began to think a little differently about everything. Everyone else in other countries are burning our flags, bibles and whatnot, and yet we get fired, arrested and get a 10K reward over our heads if we do something we’re allowed to? That doesn’t make sense at all and frankly, I feel that the United States is a little scared of the people of Islam. Fear instills many emotions and irrational decisions.

Maybe I’ll get arrested for writing this blog post, but then again don’t I have “freedom of speech”? I don’t think it exists anymore. I beg you to watch this video by Pat Condell, who articulates everything that's wrong about the mosque near ground zero. If this post didn't set some red flags for you, watch this video. Even a Brit knows better. Click here to view this video.