While Having My Late Afternoon Coffee... 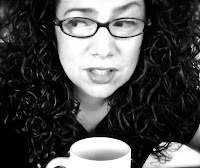 So I’m sitting in a crowded Starbucks on a late this afternoon listening to a couple of ‘seemingly’ gay men talk about “girth”. Yeah...that. I pretended I wasn’t listening and tried to continue writing. I had nothing. Not one word. I couldn’t think. Their conversation was getting more and more interesting by the minute, because for me, I have never heard two men speak so openly about sex before in a ‘feminine’ way - and what I mean by that is: sex spoken in a healthy way, not like two hillbillies chatting about poker in the rear & liquor in the front. This was something you’d get from a sex therapist - hell, even if they were a couple of gay men, they were actually helping my own sexual dilemmas out. I had to look over to see what they were wearing to make sure they were in fact, gay.
Gay man #1: Tight Ambercrombie & Fitch t-shirt with silver writing, with a pair of faded out jeans with stylish patches thrown on ever so randomly, along with a pair of flip flops which happened to match his silver writing on his tee. His hair was dark brown, with blonde highlights. Legs crossed. Pffffbt, definitely.
Gay man #2: White crisp business men’s button down with a pair of beige linen slacks slightly wrinkled, perhaps from sitting in the office all day. Linen...! His dark brown hair was swooshed forward, gelled up with tiny crispy spikes falling on his gorgeous masculine chiseled face. His pinky extended outwards while taking sips of his cappuccino. Totally gay.

I could have went by ‘how’ they were talking, but I didn’t want to stereotype too much now. They first started talking about how important or not girth was. They never mentioned length, I guess for obvious reasons. I thought to myself, “Oh no, they’re gonna totally talk smut”, but to my surprise, they were speaking about how important it was to make your partner feel beautiful and loved, before being intimate with them. The Ambercrombie boy stated that your partner needs to feel comfortable and desired, in order for him to “loosen up”. (I really don’t want to elaborate on that, but I guess it can apply to all things sexual. ...not.) The business suit started chatting about how ‘hard’ it was for him to last a long time with this one guy he’s seeing. He screeched out, “He’s just sooooo amazing!” Ambercrombie boy was teaching him ways to practice “self-control”, so that he doesn’t seem like too much of a Speedy Gonzales It was then I started wishing more women were like Mr. Ambercrombie.

It was like listening to two intellectual Chatty Cathys ramble on and on about the most interesting sexual ventures. There was much more to their conversation, but too much to remember and jot down on this post today, but I will say this: there has to be some sort of intellectual gene in most gay men and transexual women. I know this may sound totally bizarre, but every gay man and transexual woman (MTF - male to female) have always blown me away with their intelligence on such an extreme level, that I have to stop them mid-sentence and say, “Pretend I’m wearing a helmet...ok, continue.” Sometimes their conversations and thought processes go way over my head. I’m not saying that heterosexual men aren’t smart, but think about all of the gay men and transgender women who you have spoken to. Maybe that’s just my experience? I’m not sure. But even their compassion, wit, sensitivity are all more evolved somehow, making me wonder if it’s a gene that makes them tick so magnificently.

So kudos to you, Mr. Ambercrombie & Speedy Gonzales in his little linen suit for educating me a little while having my late afternoon coffee.
coffee Debra Pasquella gay men homosexuality MTF sex talk Starbucks