Liberation: Coming Out of the Closet 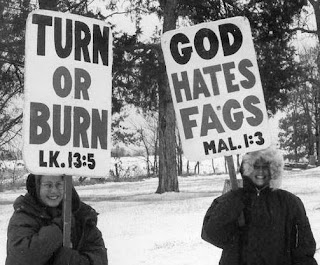 Anger motivates many people to do "missions" that are supposedly inspired “by God”. They use the name of God in order to tear down or destroy anyone that may be doing something of their disinterest. Why would any religious person, regardless of their denomination, obsess and focus so much on homosexuality? I’m speaking about those who ridicule gay and lesbian lifestyles to the point of cursing them, and in some unfortunate cases, killing them. I totally believe that what we “hate” has something to do within “us”. So, when someone hates you for being gay, lesbian or transgender, maybe they’re having a sexual orientation and identity crises of their own? That fact remains, when people fear the thought of who they “may” be, is usually generated by anger and obsessiveness, in fear of discovering that they may share something in common. I distinctly remember a friend of mine who was married with kids, went to church like clockwork, who also happened to disagree with my lifestyle. We never fought or debated about it, however sometimes she would suggest or try to influence “God” on me, as if that would change me from being a lesbian into a straight woman. I already knew God. Years later, my friend divorced her husband due to infidelity. She spent a lot of time with my wife and I, going out to dinner and sometimes, dancing afterwards. She always insisted on taking her to a gay club. We always did. She had fun and I finally saw the relaxed ‘at ease’ friend I’ve always hoped for. 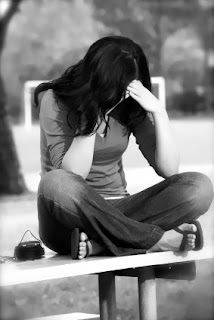 One evening, while sitting on my deck having a glass of wine with my friend, we were discussing her divorce and how she and her two daughters were coping with it. She looked over at me and asked, “Did you ever regret something you did in your life out of fear?” I had no clue what she meant by that. She explained to me that she married her best friend, in hopes that she would finally fall in love with him. She was scared that if she didn’t marry a man at a certain age, that she would be shunned by her family. Then she spilled the beans. She said she had always known she preferred women, which is why she was so obsessive about the “sin” of homosexuality, trying to desperately validate that it was wrong and trying to get into total agreement with everyone else in her circle of friends. When she came across someone like myself, who happens to be a Christian and a lesbian, she just couldn’t wrap her mind around it. “How can you justify your lifestyle with your faith?” She always asked me that question over and over. I always answered her calmly, even giving her scriptures to back up the ones she used against me. I knew the bible, I go by the bible, I just don’t go by how some Christians interpret the bible to be. There are so many interpretations, so many translations that it’s just so mind-boggling. Some scriptures even contradict themselves all in the same chapters. 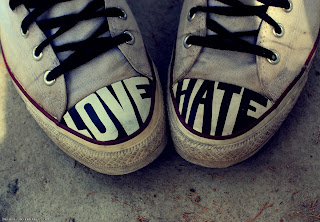 My friend started telling me she had been seeing a woman for the past couple of months, soon after her divorce. I wasn’t surprised for some reason. Her family are Irish Catholics and “dangerously” against homosexuals, to the point of possible violence. I’m almost sure of it by the way they sneered while talking about gays and lesbians. My point is, love and hate have a very fine line. Think about this scenario: two people (regardless if they’re gay or straight) have a turbulent breakup. One person says, “I hate you” in the heat of anger. Methinks thou doth protest too much. Whenever there is a base of passionate love or feelings, and the person contradicts it to the extreme --it’s usually for self-preservation and protection; it’s the opposite of how they really feel. How can someone who has loved somebody for so long and so passionately, now come to the point of hatred? Hatred always has the base of love. So with my little scenario given, think about it in terms of people who hate homosexuality, or just people who are gay and lesbian. Isn’t it evident, that all of their primary focus is on “our sin”? They usually don’t stop and continue ranting on, perhaps even hurting those who are living the life that they want to live. They’re not going to “save” people by protesting with picket signs that say, “Kill fags” and “God hates fags!” It’s ridiculous. They’re repressed people who cannot be themselves, therefore taking out their aggressions on people who are strong enough to finally come out of the closet, regardless if their family and friends shun them.

It must have been a liberating feeling for my friend to finally come out of the closet and be...herself.
Christianity Debra Pasquella gay and lesbian homosexuality is homosexuality a sin LGBT