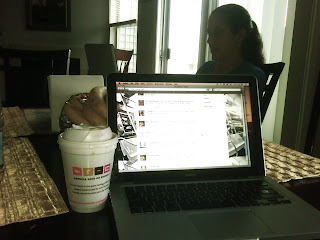 With all the networking sites that are out there, many people get so caught up in it that it absolutely consumes them to know what other people are doing. This has unleashed another hidden type of personality: we’re all nosey. We all want to see photos, status messages sharing info about what people are doing or what mood they’re in, or perhaps, who they just broke up with. Some love it for the drama, most love it to keep up with family, friends and loved ones and there are a few who are on there for ulterior motives, like “stalking” an account in hopes to see that one status message: “I’m going on vacation on the 20th! I can’t wait!” The worst thing in the world is to let other people know you’re going to be leaving your home for a period of time. You can say, “Well, I only have friends on there”---but mind you, some of these “friends” are ‘long lost friends’ who you haven’t seen in quite some time. People change. You don’t know their financial woes or what they’re going through or how long their jail sentence was...

Whoever invented Foursquare are complete idiots. It basically screams out, “I’M NOT HOME PLEASE ROB ME!” It’ll even give a tasty treat to your stalkers (if you have one or two out there) - it gives the location, street address and business establishment of where you are. For example, Foursquare will share with the world when you're out for a cup of coffee: “I’m at West 21rst St at Starbucks” ---each time I see a tweet like this, I ask them, “Why do you do this?” Either they don’t respond or they just say, “I like the feature.” Why??? Why are you leaving yourselves opened to something less than desirable? If I’m out at a store and I’m bored out of my skull, I’ll tweet something like, “Asshole in front of me on a line in the supermarket just passed wind” --needless to say I have quite a few supermarkets around here, but that’s the extent I’ll take it to. But, I digress.

Getting back to the reason of why we’re so addicted to these networking sites leaves me to believe one thing: we’re busybodies. We all hate to admit it. We want to see what other people are doing without the means of using our telephones like the good ol’ days. We want to see new photos, so we don’t have to visit them in person to see for ourselves how much they’ve changed. Has it gotten to the point where these networking sites have left our social lives somewhat empty, or perhaps leaving us antisocial? Last night after a walk in the park (which I happened to let people know on Facebook & Twitter with photos AFTER the fact), I secretly recorded my wife using Facebook for the first time in like months. She’s toggled with it back and forth, got frustrated and then just left it altogether. Now she’s back because all of her family are on there so now she’s interested more than ever, so now I have to sit there like a goddam monkey and show her the ropes. Below is a video of me grinding my teeth as she’s somewhat grasping the ways of Facebook.