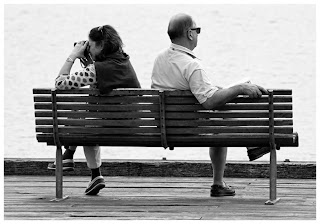 Have you ever misread someone completely? Do you ever try to read into people too much, almost as if you were a mind reader? And just because someone says one thing, does not necessarily mean it’s accurate or true at all. Sometimes, no words have to be said in order to pick up ‘the vibes’ of that person you’re trying to read, or so we think. For example, when I first met Madelene, I honestly and truly thought she didn’t like me at all. Our first date was kind of awkward. Her body language said it all for me. She turned away a lot, folded her arms into her chest while talking with me and basically, kept her distance for the most part. I was used to my dates clinging onto me or just being way too ‘touchy-feely’. I picked up a ‘no way am I going through another date with you again’ from Madelene. We kissed goodnight, but that really didn’t mean anything, in terms of guaranteeing another date. The phone call the next morning from her did. She kept saying, “I had such a great time! Can we go out again? What a great time that was!!!”  Meanwhile, I’m thinking, how could she have had a good time being so distant and reserved with me? I thought there was no way she was going to pursue me. I misread her completely. In fact, she said the first time she ever laid eyes upon me, she instantly fell in love. WHAT??? I was absolutely shocked.

Think about it: we all try to read into people way too much. Even with friends, our behavior and body language dictates our ‘affection meter’ to the other person. It’s what we say, how we say it, how we look at the person as well as any if at all, physical contact such as a hug, a kiss hello, or just touching their arm to try and make a point. Nothing on an ‘intimate level’, but more of a friendly gesture. Now here’s a situation where you would think I really didn’t like someone... Once, I had a crush on a girl I hung out with when I was much younger. We had the same circle of friends and always were together. My friend didn’t think I liked her very much because there wasn’t much eye contact. For me, I couldn’t look her straight in the eyes because I got way too nervous. I thought that if I were to look into her eyes, she would know instantly that I like her more than just a friend. So eye contact was out. Even a hug hello was out --I couldn’t. It was too difficult for me. All of these signs of “lack of affection” were quite the opposite. That’s why I think it’s important to not read into people so much and adamantly assume one thing when it’s probably the other. Even when we argue with our family, or have an issue, it may be the total opposite of what we have taken it for. Have you ever pulled back because you thought someone didn’t want to talk to you or you thought they perhaps didn’t like you?

While I do agree with some studies about body behavior, like crossing your arms while talking with someone or shifting your body away while sitting among people are signs of possible disinterest, I do think it’s more about self-preservations and self-defense mechanisms due to insecurity issues. If I’m in a meeting with more than ten people, I will literally nail my arms down onto the table or chair so that I don’t cross them, because if I do, most people will read or misread me as either disinterested or insecure. Now with email, instant messaging and text messaging, people are absolutely befuddled, arguing over things that were totally misread because they cannot “hear” the inflection of what’s being said to them. This is one of the many reasons I do not speak to any of my friends through instant messenger through Facebook or other services. I’d rather use Sype and talk with them face-to-face, or better yet --in person! Wow, what a concept - to talk to someone in real life. Which also brings me to why people are more inclined to pouring their hearts out in a letter. They don’t have to be vulnerable, showing their facial expressions or even answering back to the one who is reading it. I'm sure you were told once or twice, “Well write them a letter, sometimes it’s easier to write it out rather than tell them.” It’s all about how you want to be read, ...or misread.
body language Debra Pasquella miscommunication misreading people