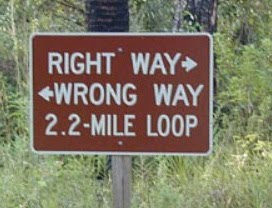 Recently I had asked someone, “Is it me? What am I doing wrong?” I seem to find myself in circles of dramatic consequences, and when it comes to the final blow, I end up sitting and thinking, “What the hell happened?” For example, five years ago when I started this blog, I wrote mostly about gay & lesbian rights, debating with those who were Christian fundamentalists trying to win out a “belief”, or even, an “opinion” about whatever. Nobody won. It was a never-ending pissing contest. I became more opinionated and in my head, “strong-minded”. I thought, well it’s my blog and I can write whatever I’d like. But, what I didn’t realize, is that it then trickled into my own personal affairs, having to be opinionated to the point of combative. No one’s opinions were valid. I was right. End of story.

Five years down the road, I figured it out. No one else could explain my dilemma of why I seem to butt heads with certain people. God forbid I come across ‘one of my own’ ---it’s just relentless bickering. Healthy debate --my ass! Although I still hold true to all of my beliefs, opinions and thoughts about certain situations, religious + political matters, I want to remain Switzerland. I want to stay neutral unless asked --mind you not "wishy-washy" but more so, opened to new ideas.   If someone asks me what my thoughts are, then fine. I will no longer give my input unless necessary. I’m unlike many (how can I say this without being opinionated and rude)---left winged liberal gays & lesbians who feel a certain way about their rights. I won’t get into heated debates about “no you’re wrong” - because that simply cannot be proven nor can it be resolved without a possible ending to a friendship. Instead, I will try to listen openly and perhaps learn something out of it instead of trying to have them see another point of view. It just doesn’t work the other way. Einstein’s definition of insanity always comes to mind.

I guess I was conditioned to go into “war mode” when I had these heated debates with the people of the Denver Bible Church a few years back. I have always felt cornered, yet I also felt cornered with the extreme opposite of people’s opinions too, this due to my own religion. With that, I want to make an apology with a very dear friend of mine who is passionate about people & their rights as equals. She’s wicked intelligent with an incredible sense of humor and the ability to overcome other people’s flaws. With that, I thank her...and I also apologize for being too openly opinionated. Through our “healthy debates”, I have learned many things that I never knew before. She opened my eyes to different ways to look at things. I think she’s the first one to do this!