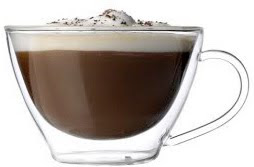 The other night, I decided to head over to the bookstore and park myself in their cafe, grab some coffee and maybe pop a chapter or two out for my second book that I’m working on. I wasn’t getting much inspiration at home and needed a different atmosphere. Madelene was with me, off searching for books then periodically coming back to my table to discover disappointing finds. She must have gone back and forth about ten times before parking herself for good, ending up purchasing a magazine as well as a calendar. We work well together when we go to a bookstore/cafe, because she realizes I’m not there to browse around - I’m there to possibly pick up books for research, people watch, drink my cafe mocha, and possibly gain inspiration in a different setting. Sometimes other people in there are way too annoying in order to muster up any type of content. There was one guy speaking so loudly into his Bluetooth over at the counter while waiting for his order, that I nearly threw my coffee at him. I noticed other people getting agitated by his disrespectful conversation about how some girl didn’t put out the night before, so he decided to leave the date before it even ended.

Although I’m quite aware that I’m not perfect --other people’s actions make me so infuriated sometimes. After my Bluetooth rage had left me, another whole set of rage set in: two teeny-boppy girls discussing “hooking up” with every Tom, Dick & Harry. Instead of focusing on what I was doing, I was focusing more about how young these girls seemed to have been, and then wondering at what age are kids starting to have sex now. After the third blow job story, I started feeling the agitation growing rapidly. I couldn’t even read what I was typing, let alone drink my frothy latte without getting nauseous. It was then, Betty Crocker and her Stepford wife looking friend sat down at a table next to ours talking about cream of asparagus recipes, as well as how it makes your pee smell a little funny. That was it. I was fuming. I now officially hated people...and their public conversations to boot.

Here I am blaming all of these people for my regrets about coming out into a different atmosphere to write, when it hit me: it’s not their problem, it’s mine. The reason this occurred to me, was that there was this little nerdy looking guy sitting a few tables down working on his laptop, also in the “bad conversation zone”, but he seemed to be very at peace and focused at what he was doing. He didn’t seem to mind all the whacked out conversations that weren’t so “hushed hushed” as I thought they should be - he was at peace with everything he was surrounded with. I sort of watched him - not in a ‘stalker-type’ of way, but more so, observing of what I should be doing more of: minding my own business and not letting other people’s b/s bother me. Of course I could always blame it on my self-diagnosed ADD, but at that point in time, I felt peaceful just watching him not even flinching at what was being said.

I guess this even relates to my own personal life. Whenever I surround myself with calm, positive people, I find myself in the same state of mind as well. I do believe we pick up similar behaviors from those we spend a lot of time with. Just as there are things that Madelene and I do that mimic one another. We pick up each other’s lingos and at times, find that even our accents have merged into one another somewhat. I’m not saying be someone else’s clone, but what I have learned is, if you are surrounded by negative people, you’ll start to hold onto that type of behavior and attitude. I found a quote the other day that read, “Your life may be the only Bible people read.” The author of course is unknown, but the message was fascinating. It’s so true, there are some people I get so much inspiration from and learn positive behaviors, while there are other types of people I seem to surround myself with who are just plain toxic to my well being. When I'm surrounded by negative people, my actions also become negative. I seem to go around the same mountain again and again when I keep accepting negative people into my life. If someone makes you feel very agitated, less than wonderful and demonstrates a lack of respect for you and everyone else they come into contact with - it’s time to start choosing different friends. By this nerdy computer guy keeping his peace, it showed me while other people may be negative, I can either choose to be like them, or choose to be more like this guy that seemed to be so calm through this chaotic crowd of unruly people. The same holds true with my personal encounters in choosing friends: either choose calm, respectful friends or choose friends who are irritated, jealous and disrespectful to you and your life. Whether you know it or not, you will mimic what you’re life is surrounded by.
at February 22, 2010