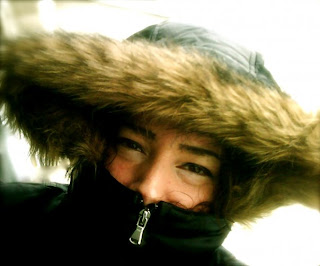 Anytime I wake up and see the streets and buildings packed up with snow, my mind automatically fills with excitement. It’s certainly not because I want to run out there to clean off my car and then move it so the plows can do their thing, --it’s because it triggers some wonderful memories of when I was growing up. Snow meant the possibility of having a day off from school. My sisters and I would go outside and make snowmen, or we’d just watch my dad push a shitload of snow onto a mound with his backhoe and make a 20 ft tall snowman himself. He even packed it with the plow to make it somewhat 'round'. We’d climb up the giant snowman with carrots and little stones to finish up the face. That snowman must have stayed well into the middle of July - he was so big! We would come running inside, tracking snow everywhere until mom stopped us at the end of the hallway to take off our boots and jackets. I always had to wear this hideous snowsuit that made it impossible to move my arms, while my sisters looked all cool in their ski jackets. My mom had hot cocoa waiting for us, while our noses defrosted. There was one day (my sisters can correct me if I’m wrong about the details of this because I was only 3 or 4 yrs old), but I remember it so clearly. My sister Carla and Cathy were outside with their friends making an igloo. I don’t know how they did this, but I remember watching from the window with my sister Dawn, wearing turtles necks. (The details I remember are all random & sketchy, so don’t mind me.) When they were all finished with their project, they told us to come out and walk inside the igloo. Each brick was patted down so perfectly and when you sat inside of it ---it was actually warm! I remember I was in awe of their creation. 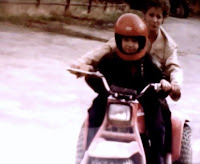 As I grew into myself a bit, at the age of eight, I started going out there, in the snow with my quads and trikes. I used to take my trike down to the lake with the other boys and pull all of our buddies in sleds. We’d have donut competitions to see who could spin around the longest on the ice without flipping. I plowed through that snow like a maniac, fearless of getting stuck or being stranded. As long as I had a full tank of gas, I was good to go. I went through trails that led up into the mountains, finding frozen waterfalls and making my own paths to get home. Now that I’m in my thirties, I fear driving in the snow, even if the roads are plowed somewhat. “Oh maybe there’s black ice.” I mean ---the thought never occurred to me when I was younger. What happens to our fears when we grow up? Is it that we see other people making mistakes that puts the seed of fear inside our own minds? I wish I was still that same fearless little girl, riding her quad everywhere, discovering new trails and towns that I didn’t even know I was in. I even crossed over a state boundary through the Appalachian trails! And you’re not going to get roadside assistance there. Hell - I didn’t even have a cell phone. Yet, the funny thing is, I’m scared to get lost or drive long distances by myself, knowing that with one touch of my “SOS” button located in my car, that someone will be there in less than fifteen minutes. Funny how I age, I become much more fearful. 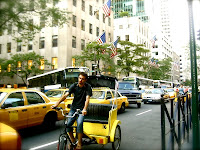 This year has been quite different though. I motivated myself with my passions in life. With putting this documentary that I’m working very hard on in front of me like a carrot, I am conquering many fears that I once had. I even drive into the city now without flinching or thinking about it. I do have my “boundaries” and little routines, such as drive down the FDR, into Battery Park and find a parking garage and hail a cab. That’s “safe” for me right now. While filming one segment of my documentary with Amy Beckerman and her partner, Ann, they took me for the dreaded midnight ride on the subway. That was a whole new experience for me. She explained how much longer it would take if we were to hail a cab and go across town that way. The subway would bring us there in no time. And she was right. My fear of subways have lessened a great deal and the thought of getting lost in the city seems to have dissipated as well. And, with my great phobia of tunnels, especially the Lincoln Tunnel, I conquered that one too. So these days, like the anticipation of a snowstorm when I was younger, I also anticipate my trips into the city, of course minus the snowsuit. Life is beginning to get fun, while my fears are beginning to get less.
anxiety conquering your fear Debra Pasquella New York City phobias snowstorm