When Friends Morph Into SPAM 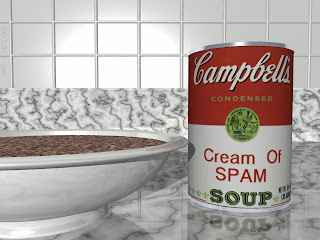 It’s certainly no big secret that I tend to speak my mind. I usually say what I’m thinking (and repressing) when someone pushes me far over the edge. I try to express my feelings as tactfully as I can, but sometimes you just have to wonder: when is it a good time to pop your cork and tell em’ what you really think? I certainly don’t want to hurt anyone’s feelings, and I know that some people have their own ways, but here’s where I draw the line...

Over on my Facebook account, I have about 600 “friends”. Maybe 20 close friends, 3 siblings, a few ‘friends of friends’ and probably 200 acquaintances. The rest of the bulk are networked people through my line of work. I don’t mind when I get an event invitation or 500, because it’s their business, it’s their line of work. I “get it”. Some I attend, and some I just say no to. Some, I have to attend. No big deal. There is one person, who happens to be an old friend of mine. I’ve known her since forever. We'll sometimes bump into one another and exchange “hellos” and catch up a bit. She’s also a writer and creates pseudonymous blogs for many seminar buffs and motivational speakers. Like I said, I don’t mind receiving event invitations - I’m fine with that. What I do mind are all the inbox emails from 100 different accounts that I am not even “friends” with.  See, when you send an *inbox* invitation, people respond to it, which makes my BlackBerry flip the feck out with tons of notifications. Not only do people respond, but the SAME PERSON responds with different accounts to seem “enthusiastic” about this particular event. It’s a smart, savvy way to get people to join the seminar for a mere $500 bucks or so, but it’s also very sly. I had written numerous emails on separate occasions and asked politely for "them" to take me off "their" list, even though knowing all the while it was just one person. "They" kindly obliged until I got another slew of them.

Getting back to my old friend, she’s a great business woman, however she mixes up her friendships with her businesses, which to me is kind of tacky. We have another friend who recently opened up a restaurant nearby. Again, she helps her out by sending out invitations and getting the word out on Facebook, which is excellent, but I received a comment on my wall that I thought was a personal invite just to socialize. She had typed out, “Hey there! Psychic night at the restaurant, Deb ! Are you guys free? Want to meet there and have readings and appetizers? I'll bring the wine!”
I was sort of looking forward to just socializing, even though I had no desire to see some scam artist psychic steal my money to only tell me what’s in my past history and present time. For some reason or another, I wasn’t able to attend, and emailed her thanking her for the invite. No response. Then the restaurant owner had explained to me, “Oh that was just to create a buzz to get some of your people over to the restaurant.”  This happened twice. I even sent out over 400 invitations for the restaurant to my own people to help out. No response whatsoever. Not even a thank you. I felt kind of hurt. Did they want to be my friend or did they just want my money instead?

I think advertising on your Facebook wall is wonderful. Do your thing and if people don’t like it, they can block your updates. But don’t shove your business down other people’s throats and send 100 different emails from 100 different accounts. It makes others feel as though they’re being used to only place a few dollars in your pocket. If these people were a bit more business savvy, they would already know the limits of mixing friendships and businesses together. They just. don’t. mix...period.
Debra Pasquella facebook spam