Have you ever woken up to the most amazing idea or had an ‘ah-ha’ moment? Many thoughts and ideas come to me through my dreams. Usually, it’ll be something to write about or in the past, song lyrics since I use to be a songwriter. These days it’s been quite different though. I haven’t had one of these ‘ah-ha’ moments in a very long time, but let me first explain one thing... It’s usually when I’m hungover. Don’t ask why - I haven’t got a clue, but it just happens. I find it funny, because I’m quite the chatterbox whenever I wake up from a night out of fun. Maybe it’s equivalent to those great philosophers and artists who scheme up their best work while being under the influence of God knows what.  ...Nah. I’m nowhere near that, but I think you’ll find this little idea interesting though. 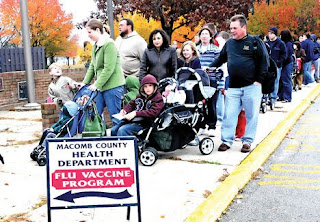 While watching TV the other day, they were discussing how the government is trying to get everyone vaccinated for the H1N1 virus. I’m totally against it and will not be taking it. When doctors ask if I got the vaccine, I simply say, “Yes.” End of story. I have my reasonings. Anyway, my thought is, what about if we can simply change things around, particularly in our school systems, since the bulk of the swine flu traffic is targeting them? Remember back in high school when the bell rang? What did we all do? We huddled up like a bunch of sheep and bottlenecked every single crevice of that building shoulder-to-shoulder heading off to our next class - and to sit where? At another student’s desk that had just been used. By using so many desks within one day, we’re spreading the virus much more rapidly. What if the teachers went class to class and the students remained in the same room with the same desks? Voila - the virus has immediately slowed down. Granted, it’ll still be out and about lurking, but in a much slower pace, maybe even slow enough to see if we can get rid of this thing once and for all.

The huge problem is, every student takes different electives and whatnot. Maybe just have students remain put for the same subjects studied and then go to their preferred subject of choice. It’s about changing the entire curriculum so that students aren’t “moving” so much. Student moves/virus moves. It’s simple math. Isn’t it worth it to try it out for at least one year? Think about it: so many schools have closed down because of this virus. Now think about your workplace. Maybe you work in an office environment. Not many people in the offices contract the virus as much as the schools do, because they’re not moving from desk to desk. And God knows whatever germs are left at a kid’s desk - gum stuck under the desk, kids picking their noses, the list goes on and on and on.

I know- not one of my “deep” posts, but at least it’ll make people think. Maybe I’ll send a letter to Obama. Less money spent on vaccines, less people getting sick, money saved for the economy, or...would it simply mean less money for healthcare? Hrmm.