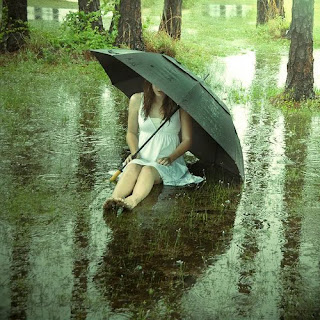 While walking out of the supermarket today, I had noticed a woman pushing her cart toward her car, which happened to be parked next to mine. She couldn’t be more than 35 or so, but what I noticed were tears streaming down her face as she placed each grocery bag into the trunk of her SUV. She didn’t appear to be sobbing - just tears that fell lightly down her cheek. I tried not to look so much, but my heart was breaking. Maybe this was the only time she could let out her emotions before she came home to a houseful of screaming kids or perhaps, a demanding husband. I was trying to imagine all sorts of scenarios in my head. Maybe someone in the supermarket insulted her? Maybe she just got a disturbing call on her cell phone? Regardless, it was none of my business. I felt the need to go up and console her, but she’d probably shift into her self-defense mode and insist that everything was okay. I hate to see other people hurting.

Have you ever felt like there was absolutely no outlet for you to ‘let it all out’? Have you ever wanted to have a good cry - for whatever reason, but the environment wasn’t suitable? And it’s not to say that your family and friends wouldn’t be there to help you, it’s just the mere privacy of your emotions. You don’t want to explain “why” you’re crying or conjure up something possibly untrue. Some people take offense if they see their partner/spouse or best friend crying, yet seem to get no explanation of why. Thoughts trickle into their heads with distrust of the friendship even to possible secrets being kept that may include them. People are insecure so they get more nosier by the second if they feel it’s about them.

Approximately a year or so ago, I found myself ridden with sadness over a friendship that had  ended. It had to end regardless because the conflicts and fights that had taken the place of the fun and laughter was just unnerving. I didn’t want to upset Mad over it so I went into the shower to have a good cry. I have a hard time closing the door to grief sometimes, which is a flaw of mine. I’ve always wondered how people could do it so easily, or do they just bottle it up and save it for a rainy day? With the way I am, I’m also afraid that I’m not going to be “well equip” to handle news which would emotionally kill me. I once saw a show on the body’s way of protecting itself. Our bodies are magnificent machines and knows only what you can handle, which is why many people say they feel “numb” after a breakup or death of a person. It’s the body’s way of protecting itself from the severe blow of grief. So many people handle unfortunate circumstances differently. Some don’t show signs of grief till days, weeks or even months later, while others show grief immediately, letting it all out so that later, they’ll be fine. I’m not sure which is better, but involuntarily, I guess we have no control how our bodies and minds cope.

Instead of just pushing my cart back into the slot, which was over on the other section of the paring lot, I had asked the women who was crying if I could take hers as well. She smiled through her tears and said thank you. I then told her, “It’s my life's aspiration to be a shopping cart attendant”, as she glazed over at me, and then let out a huge laugh.

Laughter is the best medicine sometimes.
Debra Pasquella grief mourning over a loved one sadness