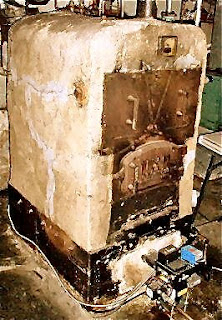 It’s been a bunch of nonsense lately. I’ve been detoured from blogger onto miniscule problems that caused a huge quarrel in our home. Now granted, the weather has been warmer and more springlike, but there have been a couple of days that were rainy and windy. Monday, I was driving home, got stuck in traffic on a donkey trail back to my place because of a down tree, and then realized I couldn’t warm up as soon as I was back at the apartment. I couldn’t blaze a nice roaring fire in the fireplace, because when it’s windy, it’ll just back up on me leaving me in a cloud of smut, so I made sure the heat was up and I got under a blanket to watch TV. I thought maybe I was coming down with something because I could not for the life of me warm up. I then heard a huge gust of wind that hit the building and saw one of my chairs out on the deck go flying down three stories. Needless to say I had to run out there to get it, which involved sliding down a mountain of lawn because the only entrance is from the front and our deck is over in the backside of the building. We have a henhouse full of bitches who would have put me in a guillotine if I had decided to just leave it there. Luckily for me, I’m right next door to the home owner’s association, aka henhouse.

Madelene got home and said she was chilled to the bone. We had dinner together, watched a movie and realized that both of us was huddled up in the blanket relying on one another’s heat.

“Is the heat up?”
“Yeah, I checked it before you got in.” I said, with confidence.

It only got colder and colder until I finally realized I didn’t hear any clicking noises from the water baseboard heating that we have. I tried putting the heat up higher...no noise. I then went to feel if the baseboards were even warm to the touch...nothing. Cold. It was now approaching midnight and it was too late to call anyone at that time. I instantly go to Twitter (which trickles into my facebook account automatically) and asked everyone for advice.

This is some of the comments of which I received:

“Good night and good luck! At least if there’s an evacuation tonight you’ll know why! See there’s an upside to everything!”

“Could it be hormonal?”

“Well, I didn’t hear an explosion so you must still be alive and cold.”

Calling Greg would have been a great option, only it was past midnight and I hate calling people out of bed who I haven’t spoken to in somewhat years to ask if they could come over to fix my boiler. But the wiseasses on my facebook account were just mean mean mean!

Madelene and I decided to grab four comforters and snuggle up for the evening. We woke up and called our landlord to come and take a look at the boiler. He made a big fuss at first and advised Madelene to go out herself to check it.

Here’s what concerns me:

1. Madelene asked me the night before how to end windows and shut down on her computer.
2. She doesn’t know how to retrieve voice mail messages on our phone at home.
3. She has trouble with call waiting and usually ends up dropping the first caller.
4. She is on the same technical knowledge as my dear sweet mom. Hell if I’m letting her near the boiler! 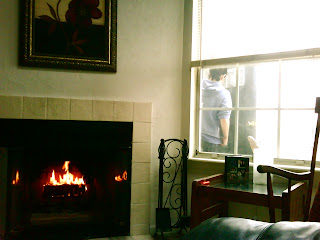 Well she got all high and mighty and went outside into the boiler room to try to fix it herself. As I sat inside, knowing that I will have the landlord come over regardless of what he says- she starts reading the 30 year old instructions that’s practically pealed off and faded from the weather. That alone, concerns me. I yelled at her to get back inside and let our landlord do this, since he’s familiar with boilers from the 1800’s. She got offended and that’s when our quarrel began. Not only did our plans for our day off together get squashed due to waiting for the landlord, but it was tense even after he had left. I tried explaining to her that it’s better for the owner to tinker with it than someone who is not familiar with boilers. She wanted to go out there with a match to light up the pilot...or the rest of the neighborhood.  As you can see, at that point I didn't care, I put a log on the fire.

By 7pm, I made her a stiff drink and loaded her up with a delicious dinner and that seemed to simmer her ego down. I know some of you women out there are laughing because you have a “fix it yourself” type of Dan at home. She also hates asking for directions. God forbid if she tries using my GPS!  I sometimes wonder if she’s a female.
I should know this by now.
baseboard heating boilers Debra Pasquella flagged boilers lovers quarrels pilot light