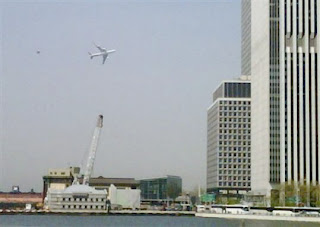 Yes, you are forgiven Obama. But what was he thinking? He allowed a 747 from the presidential fleet, An Air Force One backup plane and fighter jet to fly very low over in New York. It was a poorly judged photo op that we, the people got taxed for. When I saw the video footage on the news where the people of New York started running and screaming, my heart sunk. It almost made me cry to see they had to feel that terror once again. So, my title fits, Obama is a terrorist. He instilled fear for New Yorkers, once again.
Definition of "terrorist": a person who terrorizes or frightens others.

Even Mayor Bloomberg is outraged and cannot believe he wasn't notified of what they were doing so that no panic would set in. How could anyone in their right mind think that this was ok? In my personal opinion, it’s those who live in others states that really don’t “get it”.  They feel and know that 9/11 was a horrible tragedy, but those who weren’t there, living in another state don’t have the same reaction. In fact, I got a tweet from another blogger I have known for a while saying, “It wasn’t the actual Air Force One.”  ...And? If Obama had no knowledge of this, then why did he apologize and take full responsibility? Why are people still defending this guy? So if it’s not his personal jet, then it’s not his fault?

Listen to the fear in this lady's voice...


Another thing that is baffling: we should be focusing more on this swine flu pandemic, rather than photo shoots around New York. I have never been so outraged over a president before. This just proves to me how naive and inconsiderate this man is.

What do you think about all of this?

What about the video below? Watch the people scatter about in fear of their lives. Yes, Obama, you're forgiven, but this will certainly not be forgotten by many.
***************************************************************
EDIT: Someone took the blame... Does Obama take his "apology and his full responsibility" back now?
NEW YORK (CNN) -- A White House official apologized Monday after he OK'd a large aircraft to fly low over Manhattan -- a sight that sent people reminded of 9/11 running in fear. 
"I was here on 9/11," said iReporter Tom Kruk, who saw the plane as he was getting coffee Monday morning and snapped a photo. Kruk called the sight of the aircraft low in the sky "unsettling."
The huge aircraft, which functions as Air Force One when the president is aboard, was taking part in a classified, government-sanctioned photo shoot, the Federal Aviation Administration said.
"Last week, I approved a mission over New York. I take responsibility for that decision," said Louis Caldera, director of the White House Military Office. "While federal authorities took the proper steps to notify state and local authorities in New York and New Jersey, it's clear that the mission created confusion and disruption." ---read more here.

If they had $365,000 to spend on a photo op, they surely have enough money to pay someone off to take the blame.  That's just my opinion though.
747 flies low in New York Air Force One backup plane Barack Obama Debra Pasquella Obama is a terrorist Obama lets planes fly low in New York terrorists