Things Aren’t Always What They Seem

Back and forth, you hear what’s good and what’s bad for you, but you never get a consistent answer for a very long period of time. Then you have misleading news teams that are borderline “TMZ”, where they lure you in with a shocking statement, and then when the story unfolds, it’s something entirely different.

“See the link between too much calcium and the risks of cancer.” 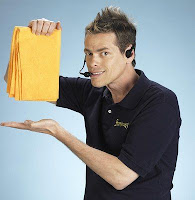 Quickly I’m fumbling for my BlackBerry like a dimwit and typing into Twitter, “Now calcium’s bad for us?” I didn’t even get the full story yet before typing that, until later on when they did the story, it was quite different. They explained that you couldn’t get enough calcium; that calcium was beneficial for you and reduces the risk of cancer. At least with certain news on the internet, they just tell it as it is, whereas on the television networks, they are so concerned about ratings, they’ll actually keep their audience stuck watching infomercials with some dorky guy demonstrating how the Shamwow works.

Anything to lure you in.

Between chimpanzee attacks, the poor to now rich lady with the litter of kids, to the world’s biggest stingrays found - I’m bored. I’m bored with current events. And then, when something piques my interest, it’s something that I highly disagree with, like melting glaciers in the Antarctica. The lure: “Startling New Glacier Update!” Of course I tap in, as well as all the left-wingin’ liberals with their boxer shorts passing up their second sphincter - the article reads: “By the end of the century, the accelerated melting could cause sea levels to climb by 3 to 5 feet — levels substantially higher than predicted by a major scientific group just two years ago.” Do I have to remind people that this has happened hundreds of years ago, plus the fact that even if it were to climb as much as 3-5 feet, it’s a high tide folks?   Nothing to see here.  Move on...  This is only going to alarm those who obsess over global warming and “the sky’s falling” syndrome. Disagree with me if you want, but I’m not concerned. I recycle as much as I can, as well as utilize blowup dolls for the HOV lanes. It’s a free country...so far.

It’s a free country, but thank the good Lord I don’t make more than $250k per year, otherwise I’d be taxed for earning a wonderful living.   See, it’s ok to tax the rich in order to give to the poor, but shouldn’t the people that have the wealth, decide for themselves whether or not to give to charity? In other words, our “free country” is literally turning into communism before our very eyes.

I digress.  I’m only putting out my very opinionated views on how I see the world, media and so forth.   My views are not written in stone, because like any other news source, it’s not all that reliable.   It’s just the lure you in.
at February 26, 2009