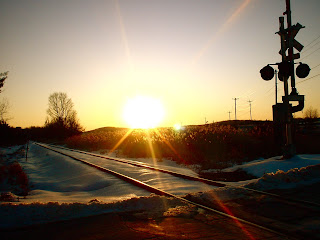 (This photo was taken yesterday upstate, in Warwick, NY while doing a little Sunday driving.)
It started when I had problems unraveling myself out of the covers. I then tried to attempt walking, tripped over a flip flop and almost knocked my head into a doorknob before falling flat on my face. Madelene was already in the shower and I wanted to make breakfast and coffee before she got out. I tried opening the cabinet doors to only find that there’s some sort of little person inside throwing cinnamon and nutmeg at me. They all came flying out and onto the floor. I reached out to grab the big can of coffee, only having it slip out of my fingers, crashing onto the floor making a big ol’ “CA-JUNGA-JUNGA-JUNGA” noise, as it rolled from one side of the kitchen to the other so that my neighbors downstairs could know it’s morning too. I’m polite that way.

While waiting for the eggs to finish cooking, I checked my blog and realized my last post had been frig’d up. The video wouldn’t play and for some reason the embedding code was tweaked somehow once converted onto Blogger. So I gave up. In a nutshell, yesterday we had a wonderful day doing some Sunday driving and shopping. Once we got to one of our favorite restaurants, I realized my stomach was gurgling after our meal. False alarm though--I didn’t get sick thank God, however Madelene was making fun of me on the drive home because my stomach was a bit queasy. Once we got home, I saw Madelene run 90 mph into the nearest bathroom. Karma.

Super Bowl was about to come on and I was going to attempt to watch it. I don’t understand how a bunch of big burly men thrashing into one another counts as a sport. I understand that you need to get the ball closer to the goalie, or finish line, or in the basket, but how do people enjoy this sport? So I decided to drink my non-alcoholic beer and have some wings. Watching the news afterwards is only a downer, because they always let you know how unhealthy everything about the Super Bowl really is. “Eating hot wings is very bad for your health. You may be consuming thousands of calories due to the fat content. Wings are only deep fried skin dipped in the most fattening dressing.”

Even after Thanksgiving, while watching the news they reported how many people have heart attacks afterwards, from overeating and drinking too much. “Holiday heart is the number one killer during Thanksgiving.” Great, thanks.

I think I’ll go back into bed and ravel myself up into the covers.
Debra Pasquella NY Sunday drives Warwick