Wonderful news. Indian Point is leaking radioactive water this morning, again. “AGAIN” it says, with no further information, other than an eight inch pipe that will be repaired.  The newspaper that I get, which is only the weekender, seems to lack information and is poorly written. I wanted to get the local paper so I could be on top of things in the community and whatnot, but this is ridiculous. Some stories are lacking the most important factors, while stating comments from people that were never said. Isn’t that libelous to some degree? There are so many things you can do as far as publishing, and yet have it be “legal” due to loopholes. Even with Youtube, if you consent to being filmed, that person is able to publish the footage on Youtube without your permission, because by 'smiling for the camera', that’s basically your signature for approval.    You can even film your neighbor on his or her own property, as long as you are still on your side of the fence or even an inch away from their sidewalk. How creepy is that? (Next video to come will be my neighbors!)

In other uneventful news this morning, Madelene woke up to the Blackberry syndrome. “Honey?” I asked, to see if she was awake.
“Huh? What?” she says, all groggy-like.
“Who and what is the Daisy Dixie Show?”
“I dunno.” she says, as she throws the covers on top of her head.

As I’m click-clacking away on my Blackberry in bed, I found out it wasn’t a show contacting me - it was some Youtuber making a comment on one of my videos. Needless to say, it wasn’t something I should have woken Madelene up for. I went to get up to make coffee and breakfast, slip on my huge flip-flops that you all told me to steer clear from, when I hear, “I know you’re not wearing those tacos first thing in the morning.”
“Tacos?” I said, confused as whether or not I stepped in some sort of Mexican meat filled tortilla. Then she says in her Spanish accent, “Noooo, I said ‘stacoz’.” (Which means high heels.) They aren’t high heels for one - they’re platform flip-flops.    And yes, I guess in the Spanish culture, they refer to high heels as, “tacos”.   And they spell it that way - “tacos”, but it sounds like, “stacoz”. 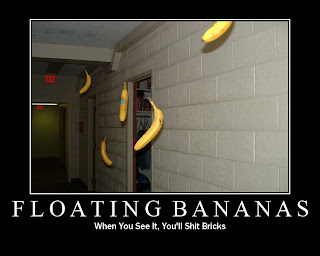 Going bananas: As Madelene rushes off to work, she notices there is only one banana in the fruit bowl. (And no, not the old one that you saw in the photo a few days ago, we got a new batch after that.) She says, “Are you going to eat that?” Of course I’m not going to say yes, because I know she wants it. I said, “No...take it.” She then gets all polite on me and says, “Oh no, they probably have stuff at work, never mind.”
“TAKE IT.” I demanded.
“No, I’m fine, thanks though.”
As she scrambling for the door and makes her way out, I jump out of my apartment on top of three floors screaming, “If you don’t take this banana I’m going to throw it atchya' and embarrass you!” My neighbor pipes in, “You better take it.” She walks back up the stairs and grabs the goddam banana.

So all I have to worry about today are deadlines and my fate with this Indian Point nuclear reactor leaking in my backyard. Hope you all have a good weekend and hope whoever is reading this lives in CA. At least we’re the ones getting the earthquakes now. Enjoy your coffee, your water is safe.
bananas Blackberry Buchanan Debra Pasquella Indian Point nuclear reactor NY radiation leak