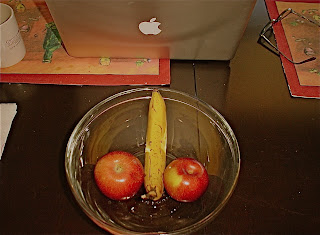 This morning when I woke up, I went to go make coffee and breakfast for Madelene, when something on the table stopped me in my tracks: two apples and one banana placed so perfectly together, that I seriously thought it was a joke on Madelene’s part. I chuckled and shuffled my tired self into the kitchen to prepare an egg white omelet for my sweetie. Even while I was cooking, I couldn’t get the image out of my head, which led into other thoughts that irritated me a bit. All the assumptions and stereotypes of “why” I “turned” gay from so many people in my life, as well as professional doctors.

“It must be sort of a deep psychological reason for why you’re gay.”  I’ve heard this line so many times from so many different types of social workers, psychologists as well as psychiatrists; a select few mind you, nonetheless, I’ve heard it all too many times, and each with the same tone. I especially remember one psychologist who was a lesbian herself, that indicated that the reason why I was a lesbian was because I must have been molested as a child. “Well I’ve been molested and I’ve always kept it repressed.” she said, hoping to relate to me so that I would become vulnerable and tell her ‘my story’, “It’s okay to be open about it with me - I’m not only your therapist, I’m your friend, Deb.”   Each word held an odd sense of anticipation has she waited for “the big story” to come flying out of my mouth and onto her notepad of psychotic patient information. It was almost like being interrogated under a bright light, giving false information just to get it over with; a plea bargain if you will. “Ok ok ok!” But I sat there with a blank look wondering why someone on my team would even assume such a thing for all homosexuals. Straight or gay, if someone is molested as a child, it doesn’t mean that it changes their sexual preferences. Sometimes it does and sometimes it doesn’t. If someone was abused as a child, they “may” pick a mate with similar qualities because they feel they don’t deserve better. I don’t know. Each person in their past + present are so different from one another that we just can’t place a huge label on everyone’s forehead...can we?

Fast forward to the year 2008, I gave my now psychiatrist who is a male, the good news that I was getting married in October. I told him that we originally planned to have the ceremony at Race Point’s Lighthouse in Provincetown, MA or we may just hold a private ceremony in the back of our favorite restaurant, which is right on the beach. 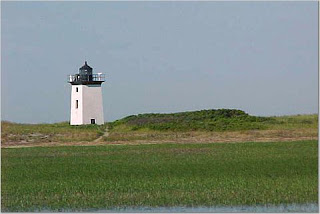 “If you do have the ceremony at the lighthouse, do you think that it may be symbolic?”
“To what?” I asked, not realizing where he was taking this.
“Well, think of a lighthouse for a moment.”
“Okay...” I sat there and for some reason, it just didn’t click.
“It’s a phallic symbol. Do you think you may be missing something or lacking something within the relationship, therefore placing a phallic symbol as a lighthouse to complete the void?”
“A void?”

Maybe he’s onto something. At least he didn’t make asinine assumptions of a traumatic and abusive childhood: he may have just guessed I needed a little phallic something or other in my life to spice it up. I don’t mind when people go that route - I mind when people are placing all homosexuals into the “abusive corner”. 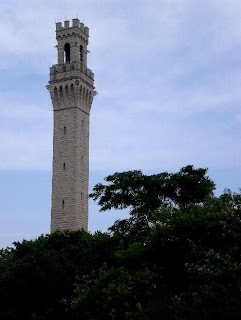 Then as I was thinking about it, Madelene and I have been vacationing in Provincetown for more than ten years. We generally stay at the same place at the Historical Crowne Pointe’s bed and breakfast, and nearby stands strong and tall, the Provincetown Monument. If you’re lost, they tell you to look up, as the monument will bring you back home. It’s the skyscraper of the smallest town on Cape Cod, a symbol for the proud gay men and the curiosity of all lesbians wondering why a huge phallic symbol was placed smack dab in the most gayest of all meccas.
It shows its history, it’s stamina for making it through the brutal winters, and most of all, it shows all shrinks across the board that lesbians are still visiting this monument, be it phallic or not...but look at the picture for yourself. We’re brave. We’re strong. We’ve got our own in a drawer somewhere.