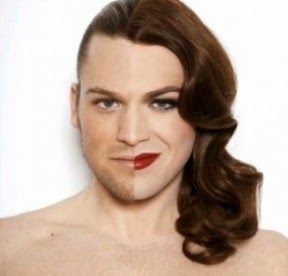 The other day, a dear friend of mine named, Marlo Bernier had posted something very interesting on her Facebook page. It was an article called, "Transgender People Are Not Responsible for Educating You," written by Parker Marie Molloy.  I have to say I loved reading this piece. It was well written and she made some great points. However, part of me has another opinion on it since society is either too lazy or too prejudice to get informed on certain issues. Part of it goes onto say, "Writers, activists, and professional educators like myself have chosen to use our time to instruct individuals on these matters; but it really, truly needs to be stressed that it is not any individual trans person's responsibility to educate others. For most, being transgender is only one facet of their existence. They can be teachers, lawyers, doctors, or accountants, and they should not feel obligated to take on the role of educator in addition to these already time-consuming careers. And for many, having to repeat educational information is emotionally draining or serves as a painful reminder of negative experiences they had while coming to terms with their identity."

I'm in total agreement with this, however in a perfect world, we'd all learn about everyone's gender identities, sexual orientations, races, religions and so on and so on. But sadly, for the bulk of society - people seem to "keep within their own circle" - "keep within their own kind" and they are more comfortable in doing so. They are unexposed and unaware of any sort of etiquette when it comes to the LGBT community. 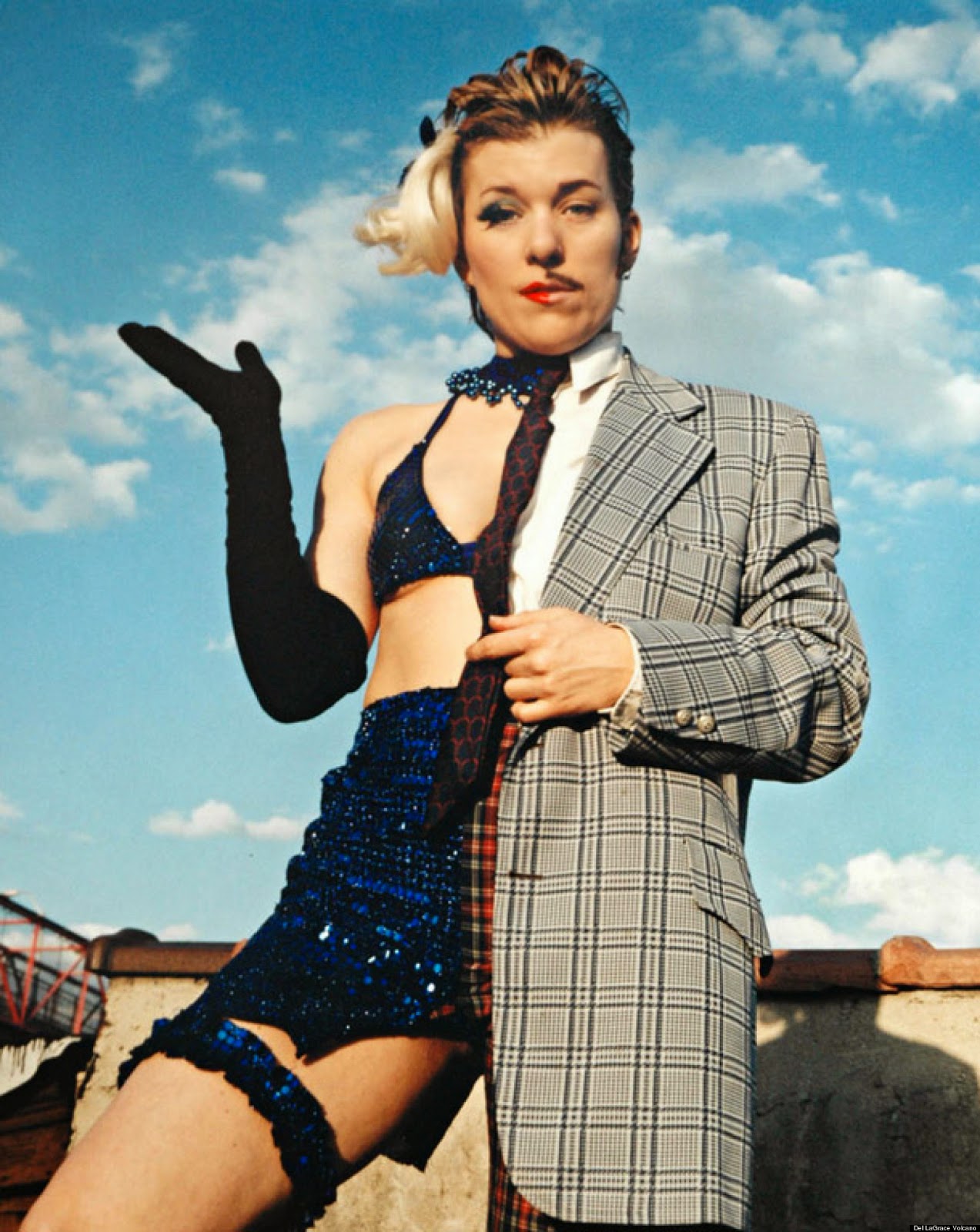 She continues… "Think of it this way: I may not have ever had a professional baseball player sit me down and explain the rules and the history of the game, but I've still managed to learn the difference between a 'ball' and a 'strike.' How did I accomplish this? By consulting the glut of information readily available on the subject online and in print. Interrupting people while they are playing the game to ask basic questions is rude, and moreover, would not be viewed as something players should take the time to address. If I want to call myself a baseball fan, the onus is on me to get up to speed. The resources exist, and if I persist in not understanding baseball, it's willful ignorance on my part. So how is the learning about or becoming an ally of transgender people any different?"

Here's the keyword: "fan". Not everyone is going to agree or become a "fan" if you are transgender or even gay or lesbian. So this baseball analogy doesn't make sense to me, unless people are truly fascinated and genuinely interested in getting to know someone who is transgender. There are people out there who ask questions to the LGBT community as if we were some side show circus. We're people. We're not trying to "outcast" ourselves anymore than we already are. I understand what she's trying to say, but I guess it's too far fetched in left field somewhere.

Some of the content talks about people inquiring about gender reassignment and such - which by any means in rude in itself. You wouldn't ask anyone about their genitals, would you? So she writes, "The genital inquisition is just one of the reasons we need to stop allowing people to use 'I'm just trying to be educated' and 'How will I learn if you won't teach me?' as cover for prurient curiosity. If you are serious about your trans education, get online or open a book. What's the difference between a gender-fluid individual and a bi-gender individual? What does 'dysphoria' mean? Why do some trans individuals get reconstructive genital surgeries while others don't? What does 'cisgender' mean? All of these questions can be answered in a matter of seconds. If you truly want to be an ally to trans people, you’ve got to start by doing your homework." 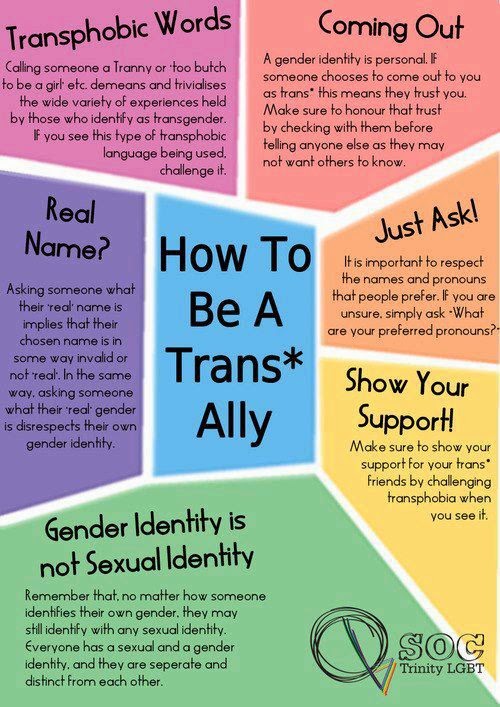 Here's the sad truth: nobody is going to Google or look through books on "cisgender" and how important it is to use the correct pronoun to someone who has just transitioned - "male" and "female". Nobody's going to do their homework, because it's not their homework to do in the first place. When I first came out of the closet at the age of 19, my friends including those who were unfamiliar with my lifestyle asked me a ton of questions. Anything from, "who plays the man and who plays the woman" to "how do you -- umm, you know?" And I accept full responsibility to educate them on how my life was - which may be different to someone else who was also gay like me. I didn't tell them to Google it or "buy a book on it" - I was happy to answer questions to someone who was curious about my life, whether genuine or not. I was flattered. (Sometimes.) Face it, most people are ill informed about the LGBT community and all that's involved. But the truth is - not everyone goes by the same rules. Everyone has their individual set standards, labels, truths, etc. The world isn't as open-minded as we'd like, so with that in mind, I don't think it would hurt to answer some awkward and uncomfortable questions. I think by doing so, you're opening the window of enlightenment - a chance to let someone into your world.

This afternoon, I had to go to my tailor to get a pair of pants hemmed. She was new in the area and opened up a small shop down the road from me. She was extremely friendly and accommodating. She said she was from the San Francisco area and was trying to get accustomed to the "New Yawk attitude". She has seen a lot of high-strung tough customers, which she's not used to. She asked how I knew of her new business and I said, "My wife gave me your card." She stared at me for a few seconds and it hit her - "Ohhhh, okay."  Oddly enough, she started telling me a story that happened to her just the other day. And please let me try to write this word-for-word of how she explained this botched up mess of an event.

You tell me what's wrong with this story.

"So like, yeah - I'm totally cool with that because you know, I'm from San Francisco n' all and very open-minded about that. I would never turn down your business. In fact, a transgender man walked in here and he had this bright, obnoxious red lipstick on and a huge wig - I mean, you could totally tell. So, being that I'm a fashionista, (GASP!!! And YES she really did say this!) I kindly explained that he should tone it down if he didn't want to get anymore stares that he was already complaining to me about. And then, my customers who were behind him left because she said she didn't want her child to see stuff like that." 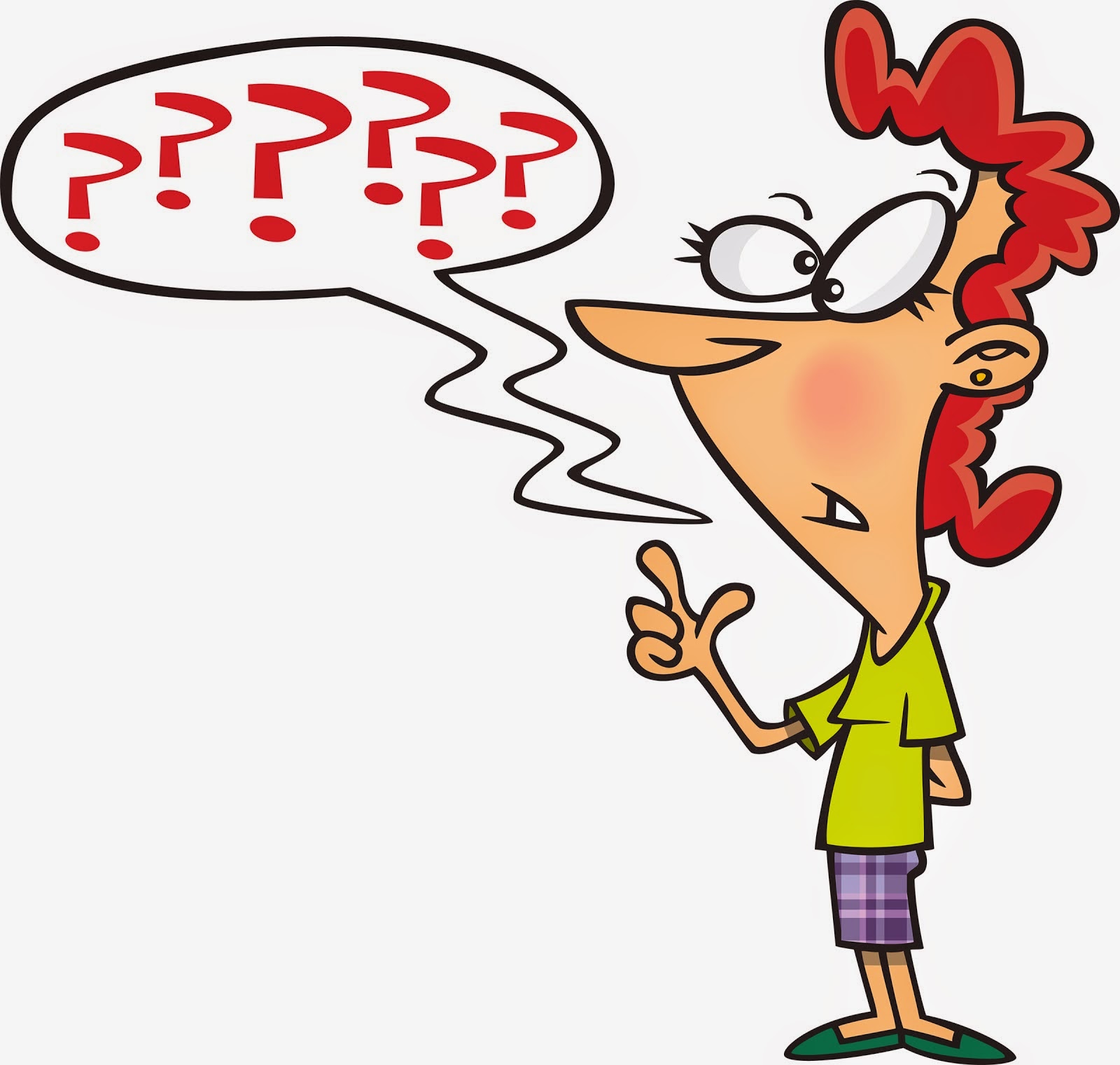 There's so much wrong with the above paragraph that I just want to proverbially crumble it up and throw it in the trash. First of all, she cannot turn down my business just because I have a wife. I reminded her of the "freedom of religion" bill that was trying to get passed in Arizona. She had no clue about it. Secondly, that's not a transgender man you moron! That's a woman. And if you're from "San Francisco" and soooo "open-minded" then why are you so goddamn clueless? But I can't say that to her. She isn't educated on any of the LGBT communities and lifestyles. So here's my point: even if people live in the most openly gay and transgendered area, they still will be ignorant to the truth. They still will not know about what's what and who's who. They still will not educate themselves on their own community. So what's wrong with a little enlightenment? I have to say that I am extremely grateful for my transgendered friends for teaching me everything I know and everything about their own set individual lives. I had a hard time in the past learning about sexual orientation vs. gender identity. Just because someone is a transgender woman, does not mean she wants to be with a man…or a woman. She could be straight or gay. I'm sure someone out there reading that last line is totally confused. So to all my transgender friends, please don't take offense if someone asks you an inappropriate 'typical' question - let them learn firsthand, the right way, instead of my valley girl tailor teaching them all about it.