Get Yer' Tin Foil Hats On - It's All a Conspiracy! 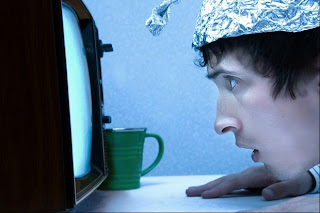 There are things in life that we can control and things that we cannot control. We can only do what feels right to us. I take in a lot. I listen to what people say and then decide if I want to believe it, use it for my own personal reasons or just chuck it out the window. I've been reading a lot about hackers who have the ability to tap into your webcams as well as baby monitors. They can even call out to your child. A friend posted an article and it was really disturbing. I also heard that the government, as well as hackers can tap into your TV cam. Oh wait, you didn't know your smart TV had a cam installed in it? Neither did I. And if you think about what most people do in front of a TV or just live their lives in front of one, then yes, it's disturbing to say the least. We can let it give us a case of paranoia -- and with much good reason, because it's quite a concern...or we can tape up the cameras. What about the microphones? So much, so much. I just got off the phone with my friend who was telling me a conspiracy theory that caught my attention. Since the government is able to tamper with our weather pattern, like HAARP -- they are able to manipulate the weather and even earthquakes to where it can damage areas that say, they want to drill oil in. For instance: Hurricane Katrina. At first I was like, "Nahh..."  Then again, why did it take so long for our own country to save its own? But when you think about all the corruption that goes on and the fact that the CEO of BP, Tony Hayward sold shares weeks before the oil spill disaster, it kind of makes you rethink anything other than "legit practices". She reminded me about the chemicals to rid of the oil - to "clean up" the ocean. Clean? More like hiding it and pushing the oil way down low where people cannot detect it. It's still in there. I hear people saying, "Oh the ocean has a way of regenerating itself." But when does it come to the point where the regenerating is just a process of spewing up the oil that has been already spewed out into our waters. The Pacific ocean is now tainted with radiation due to Fukushima. Eating fish is now a concern for many who are "aware" on the West Coast. What about the east coast? What about farm raised GMOs, like Tilapia? Is any fish safe to eat anymore? Ain't nobody got time to think about dat'. But if you have about fifteen minutes, watch this video below about how the radiation is still leaking into our ocean and our fish are migrating to other areas that are infected with cancerous radiation levels.
Click here if you cannot view the video through a mirrored website.

The only thing you can do is educate yourself. You can't go around telling people 'this is bad' and 'that's even worse' -- unless you have a blog like moi. But that's neither here nor there. The other day while at a family BBQ, Mom asked if I wanted corn. I'm not going to tell her that all corn is poison. That's my educated knowledge. It's a pointless vegetable that's filled with GMOs and chemicals. It's no longer safe to eat. Can you just imagine me giving a lecture in front of the BBQ while people are waiting for their goods? You can't do that. And while you're sitting there "preaching" --- you have your flaws, whatever they may be that can be 'called out' on. It's YOUR personal decision to consume or not to consume. And nobody can tell you otherwise. It's like religion. You can share your views on food and what you eat and think it's "okay". I love "new studies" that show a once thought-to-be "bad" foods are now super healthy for you. Eggs are bad. Eggs are good. Alcohol is bad. Alcohol is good. Coffee is bad. Coffee is good. Life's too short --- what works for you?