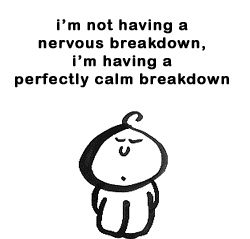 There is nothing you can do to control any situation. I'm learning this more and more as I move closer and 'season' into my fourth decade. Did you know that in Judaism, it's believed that we're at our highest level of understanding at the age of forty? Also, they prefer to teach their students about the Torah at that age as well. I've always wondered why, but now that I am moving closer, I'm beginning to open up my eyes to a whole lotta' things around me. For instance, I remember about eight or nine years ago, a friend told me to pray for understanding of people's motives and to not react once I encountered an "offense". Pray for understanding. Of course, I reacted, blew things out of proportion and found myself all 'emotional' over every. single. thing. that had transpired in my life. Then one day, I sat down and prayed for the understanding of people's motives. More than 80% of the time, I figured it out before I reacted. But then I went back to my old ways and overreacted over everything again. It was a vicious cycle. I read a saying the other day on one of those stupid e-card quotes that people fling up on Facebook. Although I kind of hate them because they're so unoriginal, one stuck out that was really awesome. It said something like, in order to forgive completely, you have to just accept that the other person is just batshit crazy. (My wording may be incorrect but the "batshit crazy" part was in it!) Anyway, isn't that the truth though? Have you ever had to forgive someone a bazillion times and then had to decide whether you wanted that person in your life or not? And if you did want that person in your life, you really have to accept that the person is a bit 'touched' and leave it at that. Expect another "offense" or outburst or whatever that person does to annoy the hell out of your life. Simply walk away and let it breathe. Then again, you can also choose to just walk away for good. 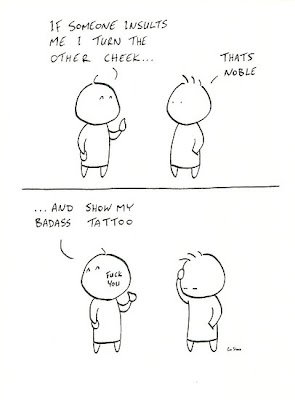 There came a point in my life recently where I had to just say, "Screw it and just accept it." With that being said, it's also important to not let people disrespect you. You're the only one who can allow that. If it's at that point --- walk away in silence. Let them fight with themselves. Let them mumble and complain about you. Let them assume who you are and stew in their own resentments, jealousies and self-loathing - which is what it is. When someone doesn't like their own life, they will hate yours more. When someone isn't happy, they want you to be unhappier. You can't give peace without having peace. I have to say my mother is probably the strongest and smartest person I know. She sees through the chaos, almost in a God-like way. She can determine 'what it's all about' and not make a fuss over any offense she comes across. She doesn't "bite back" - she lets it simmer down until the other person realizes what they've done. Whenever I'm outraged about something, my mom always says, "Just turn the other cheek!" I would be like, "And let them keep bitch slapping me, Ma?" But what she meant was, let it cool off and let some light shed on it. More so, let God handle it. I still have a lot of work ahead of me, but I am grateful for what Mom has taught me because I've learned that it's not about how you feel over a situation, it's all about how you react which determines not only your character, but your own peace of mind. Mama knows best.

For more of Deb's articles, please visit: www.debrapasquella.com or join her on Facebook and Twitter. Check out her cooking blog for some of her famous recipes!
forgiveness give it to God Hebrew lessons learned let it go mama knows best peace Torah