Comparing the LGBT Community With Dogs? 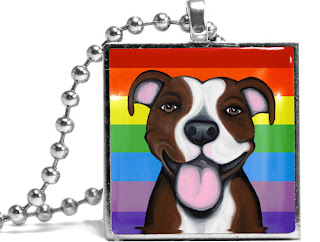 The other day I received an interesting email from Anita Pollack. Let me explain why I'm "outing" her email first. #1. It was highly offensive and #2. I'm still so surprised readers will email opinionated bloggers. She just wanted to have a one-way conversation with herself. But here's how she started off. "After reading your opinions on pit bulls, I was so surprised to see you are a supporter of the LGBT community. I don't understand how a person who is compassionate and open-minded with humans could be so biased against a particular breed of dog. It seems to me your neighbors, who may appear, to be lovely people are NOT responsible dog owners. They should make sure that their dogs, whether they're tiny or massive, are walked and controlled on leashes. NO DOG of any breed should be left unattended in a yard , fenced or not. Dogs like your neighbors can be very sweet , but they are animals, and need HUMAN guidance. DO NOT BLAME THE DOG -BLAME THE HUMANS. We are the ones who were created with more advanced brains and we should use them!"

And while I agree with humans being the culprit of ill-bred dogs, I still would never want to own one in fear that the particular breed has been tampered with due to all the injuries and fatalities. That's just my opinion based on facts that I have read and have heard about, which I can provide anyone with. I asked her why she would compare Pit Bulls to the LGBT community - or my "open-mindedness" to the LGBT community. What does that have to do with the other? I did understand where she was going with this, but it was just the comparison that ticked me off.

She responded with, "Deb: I'm not comparing the LGBT community to pit bulls. I was merely saying since you are an advocate for the LGBT community I would expect you to be more open- minded. You have misunderstood me. I didn't say gays and lesbians are killing people! It seems we do agree on one thing - It is a shame what IRRESPONSIBLE OWNERS have done to these dogs. Warmest regards to you."

I explained to her that I have an open mind to people and animals who do not hurt or kill others. The blog post she is referring to is this one. My neighbors are very nice people and they take very good care of their dog, which happens to be a Pit Bull, however their dog happened to have made one too many visits onto our patio, not letting us out of the house. He was aggressive and barking only feet away from the door. The video I captured was of him barking out on the edge of our lawn. We called our neighbors on several occasions to please call their dog. On the third time within one month, we decided to call the police because we literally could not walk to the car without being charged at. My stance against Pit Bulls doesn't mean I hate this breed - it means that this breed has too many horrific offenses against it in order for me to be "accepting" of one. And while that may be a shame because it's mainly due to poor breeding and ownership, it's my opinion as a blogger. I said to her, "I have an open mind to things that do not hurt or kill people. Maybe you should do the same and open up your mind to the truth. I am not an advocate for dogs that kill nor the owners who are responsible."

Am I not agreeing with her? I'm only disagreeing with her illogical comparison to gays and lesbians and DOGS. Good God why would you do that? My acceptance for the LGBT community has little to do with dogs. I have to be accepting, I am a lesbian!

She contacts me again, "Deb: If you want the last word, in this discussion you have it. I thought blogs were for expressing opinions on the part of the blogger AND responders, but evidently you refuse to hear anyone else out. I had wished we could have had a spirited discussion not a fight but you seem to only want to present your opinion and won't listen to others. If you want to get on the level of personal insults, I really need to sign off. Thanks for your time and I look forward to NOT HEARING FROM YOU AGAIN."

(She may want to get a blog of her own at this point.)

Here's where I am baffled. I never insulted her. I just took a stance and said she should be opened to the truth. LGBT community vs. Pit Bulls? Really? Now I may start to insult her, because you have to be dumber than a box of rocks to compare the two. That, being my first insult. It reminds me of those religious zealots who compare pedophiles, rapists and murderers with gay people. I have zero tolerance for mediocre-minded people who take any opportunity to bring up the LGBT community to make a point when it has zero to do with anything. Get a life and "X" out of an opinionated blog if you can't take the heat.

For more of Deb's articles, please visit: www.debrapasquella.com or join her on Facebook and Twitter. Check out her cooking blog for some of her famous recipes!
at August 05, 2013