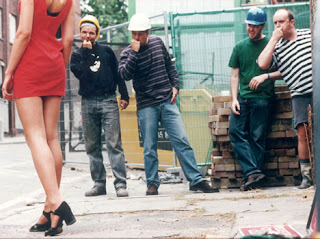 While sipping my coffee before work, I was scanning down my Facebook feed seeing what my friends were up. It was then I saw a note that was shared by my friend & comedienne, Mimi Gonzalez, written by a lady named, Ife Franklin. It was a heartfelt letter written to Bay Windows and being sent to the Governor of MA and the Boston Globe regarding men hitting on she and her wife in Provincetown, MA. As I continued to read it, it started to become much clearer that this woman was not just ranting about black men hitting on her, but she was ranting about the lack of care by "the white folks" who hire them and who have "the power to fire them". I'll just copy and paste her note first, and then my long comment afterwards. I apologize for such a long blog post, but I had to speak up. Feel free to leave your honest thoughts about this - even if you highly disagree with me. I understand she has a very unfortunate, traumatic past with rape and harassment, but this went a bit further from the issue at hand. Am I way off with my opinion?

"I want to start this off on the positive...I LOVE P -TOWN. My wife and I have been going there since we met about 13 years ago. We looked in the window of Ruby's for years at the ring that I so proudly wear. My Wife asked me to marry her on the marsh at the jetty. We spent our honeymoon there..why? because we wanted to be in a place where we "could just be ourselves" Gay, Lesbian, Happy. This past weekend was WOC (Women Of Color Weekend) in P-town..... and I want to be positive about this too..because this is a long time coming. It warms my heart to no end to see my Sisters enjoying themselves..laughing, taking in the sun and sea breezes..when we walk down Commercial Street we smile big, hug, and say hello. All this is grand, wonderful, and needed. What is not needed...The harassment by the Black men that come to work there from the islands. This is not my first letter to Bay Windows about this. A few years back I sent a letter about this very subject, it was published (Thank you very much) and I also received a email from the Province Town Chamber Of Commerce (Thank you again). Instructing me to get in touch with them and the police if this happens again...well it has happened again and again. Now I will take ownership..I have not called the police or contacted the town Chamber..why? Well, here is where this gets a little sticky for me...So if I call and say "there are some Black men harassing me" will they round up ALL of the Black men? Even the ones that have done nothing wrong? Has there been ANY training or introduction for these "workers" educating them that they are in a mostly Gay culture? that the women...Black women or other wise are off limits? I have taken the time to pay attention to see if these men "go after" the White Women as they have the Black/Brown Women..NOPE. And here is where this gets sticky and political..These men KNOW that if they even give a LOOK of perceived disrespect in the direction of the White Women that they will no longer be able to "come here and work" because the law would come down HARD on them..ie White folks are more valuable..have the power to get them fired so they ( the men) "dont even try it". Yet it is "open season on us".. a "free for all". I on the other hand know my worth..My money is just as green as anyone's and the shop keepers understand this..yet if "we" ( folks of color) stop going to P-town it would not make a difference to the commerce as folks that are not affected by this..ie (White folks) will continue to go and spend big bucks. As the saying goes..."Money Talks". As my friends were walking back to the car Saturday night a car of 4 men slowed down and started hissing and and asked my friend to come over to the car..she replied in a strong voice.."I'm GAY let it rest!!!!" Once we were in the car we talked about this...heatedly. Something needs to be done..... what, I do not know. I feel that this harassment is a time bomb about to explode. At some point some man is going to take it to the next phase..my fear is that the "cat calling" will turn into "groping".... "grabbing"....rape and or death..why because in their hearts we are just some "batty gurls" and all we need is some dick to "set us right". As A survivor of rape I don't want to think about this as I am walking down Commercial Street with my wife and when I am alone it is much worse I cant relax and enjoy my total self, yet this is what is on my mind more and more. I feel less safe in P-town now more than ever. So P-town do you really want us there? I really want to continue to come...but I NEED to know that you are really doing something to combat the homophobia that is being "imported" in the workers that you hire. Sincerely....Ifé Franklin, Roxbury Ma."

You stated. “These men KNOW that if they even give a LOOK of perceived disrespect in the direction of the White Women that they will no longer be able to "come here and work" because the law would come down HARD on them..ie White folks are more valuable..have the power to get them fired so they ( the men) "dont even try it".

I truly was sympathizing with your story and was nodding my head, until I read this paragraph. My wife and I have been going to Provincetown for sixteen years now. Within those wonderful sixteen years, we have had men of all races - white, black, Asian, etc., hit on us, especially walking down Commercial Street after the nightlife has simmered down to a low roar. In fact, (and please take this for what it’s worth), we have been hit on more by black men than we have with white men. We don’t tally them up, because we frankly don’t care what nationality they are - pigs will be pigs. People cannot control the behaviors of others after their hours of employment. It’s impossible. The characters of many gay men in Provincetown has been quite disturbing. I have seen gay men bash lesbians right on the street and I’m sure you have seen the tension between gay men and lesbians there. It’s a shame and really sad that we all can’t respect one another, but the truth is, each individual is responsible for their own actions. And you also have to keep in mind that there is no “safe place” in the world.

We normally stay at The Historical Crowne Pointe Inn. They bring in employees from Jamaica who are hard working, self-sufficient, mostly polite and courteous. If a few out of the hundreds they hire are harassing you, report them to the local police. If you’re getting “catcalls” - take it as a compliment - move on. What is “harassment” to you? If you felt threatened, did you call the police *right away*? Did you make sure that these men were off the streets to ensure that all the people in Provincetown were safe too? Or did you just get very upset because a man found you attractive and did a little wink & whistle at you? I don’t mean to be disrespectful of your feelings or disregarding anything you say, but it’s a true fact that anyone - male, female, black, white will possibly turn their head and say something if they think you’re beautiful. My wife and I were “catcalled” by another lesbian not too long ago in PTown. She literally hung half her body out of a passenger side window of a pickup truck saying the most vulgar and disgusting things, of 'what she would love to do to us'. We laughed. She was a white lesbian.

You said: “Has there been ANY training or introduction for these "workers" educating them that they are in a mostly Gay culture? that the women...Black women or other wise are off limits?”

If a man or woman makes a catcall, does this necessarily mean that they know that “their prey” are off limits? Think about New York City for a moment. Cliche as this may sound, pass by a construction site full of burly testosterone-filled men. They don’t care if a beautiful woman passing them by is married, straight, gay or celibate. They have no clue that they are off limits. Truth is: they. don’t. care. Let’s bring up the obvious factor here as well: most men love to see two women together. It’s the biggest male fantasy. They can’t help themselves. And if you’re going to blame establishments for individuals harassing you after hours because they were hired, you’re not going to get anywhere. We’ve been hit numerous times by black men in PTown - even while they were at their place of work which happened to be a very well-known restaurant. My problem with your post is that you revealed your race card. This is not the 1950s. Do we have racial issues? Of course. But have we progressed? I think so. I still think we need more work on the underlining tension. When you write, “White folks are more valuable” and “They have the power to get them fired” - you’re basically saying a black employer can’t do the same. What an example we have - we have Obama as our president. Just think, even Chris Rock joked about having a black president a few years before Obama was even known. Now, we have Obama as the most “powerful” man in the U.S.

For more of Deb's articles, please visit: www.debrapasquella.com or join her on Facebook and Twitter. Check out her cooking blog for some of her famous recipes!
Barack Obama Debra Pasquella Ife Franklin LGBT Mimi Gonzalez Provincetown pulling out the race card racial issues women of color