Party In the Ghetto 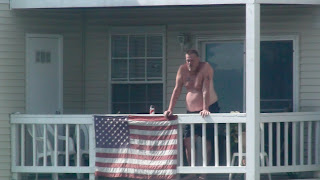 (Click the photo for a larger view.)
It had to be a full moon yesterday. Everything was a bit off kilter. Some of it was entertaining, and some, well, let’s just say could have been lived without. You’re probably sick and tired of me rambling about how excited I am to move out of this complex, but I will admit that there is part of me that will totally miss it. I love people - I love different, quirky, eccentric type of people. The weirder the better in my opinion. Of course there’s a fine line, but I think we all have our little issues that make us a bit interesting to certain people. My day started off while I was in my home office yesterday morning around 10am. There’s a man across the way who likes to go out on his deck and yell out to the women below who are walking their little dogs around the complex. He’s not rude or making lewd comments - he’s just trying to make pleasant conversation. Whenever there’s a bit of action (like cops/fires/drama) in the neighborhood, he’s out there immediately on his deck either directing the cops where to go or just asking people down below on the street what’s going on. He’s seems like a very down-to-earth patriotic type of guy. He’s unlike any of his neighbors. Much of the complex has filled up with transients from the city. There’s a lot more crime and a lot more excitement brewing about. But yesterday morning, as the temps started rising, I had the pleasure of witnessing him shirtless, as he was greeting a young girl walking her dog on the road. 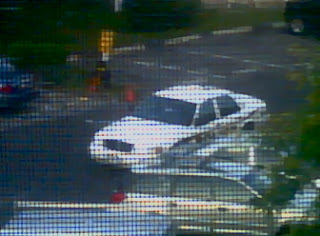 (Excuse the poor quality of this photo, it was taken very quickly with my BlackBerry through my kitchen window which has a screen.)

Madelene and I left the condo and went over to the house to finish painting. When we came back home, I received a facebook notification from my neighbor: “Look out your window. Six cop cars!! She’s yelling, ‘No more harassment Mike, police brutality, I’m calling the FBI!’ Who needs a movie! I see rifles and a police dog!” While it was kind of entertaining, it was also sad because the neighbors are so fed up with the nonsense that goes on around here lately. Drugs and domestic violence has become a huge part of this area. A few years back when we moved in, we never encountered “shady” types of people. Of course, domestic disputes and noise ordinance can sometimes trickle in the cops, but that’s expected anywhere. I’ve always lived upstate in the woods, hardly no neighbors or anything. So when I moved here, it was a total different world. There were actual people around. It was a nice change for a while and in some ways, it made me feel comfortable hearing people talking, laughing or just hanging outside enjoying themselves. The only thing I really complained about back then were my noisy neighbors. I would write about it and some people would easily say, “Move out if it’s that bad” - but it’s not that easy and it really wasn’t a “threat” to my safety. Just a couple of people bickering once in a while and stomping on their hardwood floors like a stampede of wild elephants. But now, I’m taking their advice... 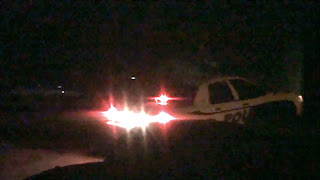 (Again, I apologize for the poor quality of the photo. It was taken at 3am while I was half asleep.)

Before I go to bed, I open up my window that’s facing the parking lot. It’s usually quiet with the exception of the lady across the way gossiping on her telephone at 11pm. That type of “noise” never bothers me. In fact, it makes me sleep better. She’s always happy and excited to tell her stories. I love that about people. If I hear happiness, I’m content. It’s the same with children who are playing outside. If I hear children laughing, I’m content. But last night, or should I say morning, at 3am, I was woken up by the sounds of different types of laughter. This laughter made me nervous. I heard a bunch of kids, maybe in their teens out in the parking lot who seemed to be intoxicated. They had that ‘city slang’ - the thug-type of chatter. They were sitting on the lawn that was near all of our cars. I closed my windows and hoped that they would tire out and go away. But they didn’t. I knew someone in our building heard them as loudly as I did, and that’s when I saw the lights of the cops rolling in. Thankfully, no one was arrested and they simmered down. The sounds of drunk city kids in the parking lot is much different than the sounds of my neighbor talking loudly on her phone or kids playing outside. These were sounds only reminded me that if they were any more intoxicated or lingered a bit longer, there may have been a lot more trouble...and many more cop cars to boot. It had to be a full moon.
For more of Deb's articles, please visit: www.debrapasquella.com
COPS crime Debra Pasquella domestic disputes loud neighbors Party In the Ghetto