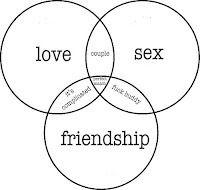 There are many pleasant, uncomplicated friendships that I have with many straight and gay people. It stays “pleasant” and “uncomplicated” for various reasons. For the most part, I prefer to keep my friendships semi-surfaced. Let me explain... Learning from my past, I’m beginning to realize that if I become to close, or perhaps spending too much time with one person, there seems to be more quarrels, disagreements or in rare cases, an underlining beguile that seems to have a great influence over their actions and behaviors. I’m at fault for my personality quirks at times. I’ve been told I’m flirtatious, overly friendly at times with an “assuming” underlining intent. Of course, those assumptions about me were all told by former lovers or very opinionated friends who know me well enough to tell it like it is. My straight friends who I mostly hang out with never ‘go there’ thankfully. They never assume, they never tell me ‘what’s wrong with me’ or ‘what I need to do’ - they just accept me for me, and I love that. Spending time with them doesn’t mean trying to figure their motives out - it’s just time spent well. Usually, “time spent well” means hanging out with my heterosexual girlfriends and those who are already married. I rarely hang out with single lesbians anymore.

It would be nice to relate to someone of the same lifestyle. My entire social life revolves around straight people. I have no problem with that. I grew up with straight people and relate to them on many levels - regardless of any gay/straight differences. People are people. We have the same dramas; we have similar problems. Although, there happens to be a level of connection that I miss very much when I spend time with another friend who is also gay. I seem to run into a lot of problems trying to give it another shot, on their part and on my part. Yesterday, while sitting in my therapist’s office, I explained to him how all of my ‘gay friendships’ always takes a turn for the worse. There’s either a ton of drama or loads of arguments for whatever reason. Maybe I’m “too close” with them - trusting them more than my straight friends due to the ‘connection’ of just living the same lifestyle. And that reasoning is just insane in itself. He stared at me for a moment and then said, “You can’t be friends with a single lesbian, Deb.” I just looked at him with disappointment. He went on, “It’s just like a single woman being friends with a single man. There’s bound to be a complication or two down the road.” And then, it all made sense.
“But wait - I’m married...?”
“Doesn’t matter,” he said, “Straight men go for married women and vise/versa, right?”
“I guess.”
“Then what makes you think this can’t happen with gay women?” he said, while smirking.

Which brings me to this question: can a straight single man be friends with another straight single woman without a history of ‘intimate attempts’ so to speak, or perhaps an untold interest of possibly more developing? Here’s something interesting that I learned... (Yes, I’m going to quote you Mr. TJ Kelly & Ryan Nickulas.) With gay men, I have learned that sexual preferences may determine if the two friends ‘go there’ or not. For instance, TJ Kelly said when answering a question posed, if Ryan and himself have ever been intimate, “Two bottoms don’t make a top.” I guess for us lesbians, (and I’m gonna say it boldly), we’re emotionally messy. We don’t care if you’re a pillow princess or diehard diesel dyke. If we’re crushing on you, perhaps totally gaga in love, we’re going to accept any 'positioning' in the game. With that being said, aren’t gay men emotional enough to do the same? Does it really matter what someone prefers sexually behind closed doors? I relate gay men to lesbian women, or just women in general because they’re so emotional and like us, so why wouldn’t they ‘think’ or ‘feel’ like us? But then again, I have to say that I’ve seen feminine lesbians only go for masculine butch lesbians. They won’t sway from that type because that’s their preference, plain and simple. Another question is: is it difficult for a single gay man to be friends with another gay man without the underlining romantic feelings or interest - even if there isn't a desire for a relationship - is there still a level of sexual tension between the two? Do they have these setbacks in friendship like some lesbians do?

To all my heterosexual readers (which is 95% of my readership), you do not have to answer or comment, but if you do, how do you handle friendships with the opposite sex? Keep in mind, I'm asking on a broad spectrum - not just for the LGBT community - just complicated friendships in general.
For more of Deb's articles, please visit: www.debrapasquella.com
complicated friendships Ryan Nickulas Debra Pasquella gay and lesbian issues gay sex lesbian friendships LGBT TJ Kelly tops and bottoms