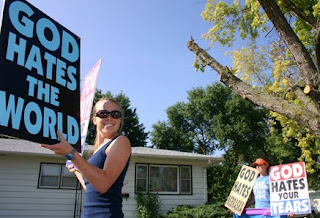 This isn’t our rights to free speech - this is terrorism, plain and simple. The Westboro Baptist Church (which goes under the website, www.GodHatesFags.com) and Fred Phelps plan to picket at the funeral of a nine year old victim, Christine Taylor Green, who was shot during the attempted assassination of Congresswoman Gabrielle Giffords by Jared Lee Loughner. In the video below, Phelps states that all the victims have died for the people of AZ and that it’s time to repent. “However many are dead, Westboro Baptist Church will picket their funerals. We will remind the living that you can still repent and obey.” Fred Phelps said in the video below, indicating that all the people who have been shot was a result of their sins. He also goes on to say, “This is ultimatum time with God. Except ye repent, ye shall all likewise perish.” I’ve always wondered why the Westboro Baptist Church would hold picket signs thanking God for the tragic events of 9/11. It didn't have anything to do with anything. And if they were going to picket, wouldn’t they picket against the terrorists who were of another religion? That's in the Ten Commanments, "Thou shall not worship other Gods" - what happened to that one? As I see it now, it’s a much larger picture than what I once thought. And as silly as this sounds, a movie I recently watched kind of put it into perspective for me.

The other night, we watched “Legion”. The story line on the IMDb site reads: “An out-of-the-way diner becomes the unlikely battleground for the survival of the human race. When God loses faith in humankind, he sends his legion of angels to bring on the Apocalypse. Humanity's only hope lies in a group of strangers trapped in a desert diner with the Archangel Michael.” God had sent his angels, which were very different from what you and I would typically think “angels” would be like. They were evil and had every characteristic of a demon, however, the Archangel Michael and Gabriel made it clear that God was angry at His people and that He needed to destroy humankind once and for all. He brought down angels that were so vile, so evil, that you had to wonder, is God really this hateful? Is He really this angry at all of us for not “repenting”? We want to hear that “God is love” and "God loves all of us” - but what if we’re way off in our assumption of this “loving God”? What if our loving God is a vengeful, strict father who wants to punish all of us if we don’t do the "right" thing? 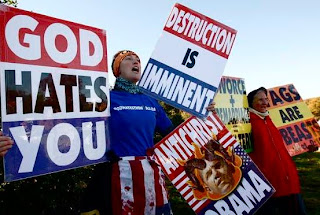 If you are reading this and already have a relationship with God like I do, you know that this is so far from the truth. Not only are the Phelps a bunch of media whores because they have a congregation of less than fifty, and all of them being related to one another, but they are spreading such hatred around the country. Can you imagine Jesus picketing at the funerals of your loved ones? Think about it. The entire concept of WWJD has gone right down the drain. These people have no clue about Jesus or what He did and what He has promised us. They have no clue how to be “more like Jesus” - as it says in the Bible. Have they even read the Bible, or are they only grasping the wrinkled pages of Leviticus? These people don’t know what true love is. They thrive on the misfortunes of others, foaming at the mouth with anticipation of hurting other people.

In this Scripture found in Romans 14:1-4, it says this:
"Accept Christians who are weak in faith, and don’t argue with them about what they think is right or wrong. For instance, one person believes it is all right to eat anything. But another believer who has a sensitive conscience will eat only vegetables. Those who think it is all right to eat anything must not look down on those who won’t. And those who won’t eat certain foods must not condemn those who do, for God has accepted them. Who are you to condemn God’s servants? They are responsible to the Lord, so let him tell them whether they are right or wrong. The Lord’s power will help them do as they should."
As Christians, we’re not to tell others what’s “right or wrong”. It says so clearly in their own Bible that they trash us with. It’s telling us not to look down on those who don’t go by your beliefs. What am I missing here?
“You were getting along so well. Who has interfered with you to hold you back from following the truth? It certainly isn’t God, for he is the one who called you to freedom. But it takes only one wrong person among you to infect all the others—a little yeast spreads quickly through the whole batch of dough!I am trusting the Lord to bring you back to believing as I do about these things. God will judge that person, whoever it is, who has been trouble and confusing you.” ~Galatians 5:7-10

The Most Important Commandment--
“One of the teachers of religious law was standing there listening to the discussion. He realized that Jesus had answered well, so he asked, ‘Of all the commandments, which is the most important?’ Jesus replied, ‘The most important commandment is this: Here, O Israel! The Lord our God is the one and only Lord. And you must love the Lord your God with all your heart, and all your soul, and all your mind, and all your strength. The second is equally important. Love your neighbor as yourself. No other commandment is greater than these.’" ~Matthew 22:34-40

Below is the video of Fred Phelps warning people to repent and thanking God for the shootings in AZ. How awful.
If you cannot view this video on mirrored websites, please click here.
Also, read about a true and heartbreaking story from Fred Phelps son, Nathan Phelps. It's called, "The Uncomfortable Grayness of Life". (Thanks to Jess for providing the information.)