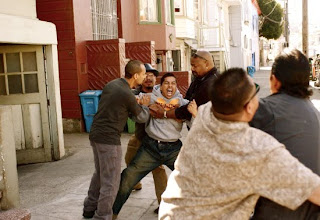 The other night I was working on my third night with insomnia. Tossing and turning, I couldn’t manage to keep my eyes closed. Sleep doesn’t come easy for me at times, and when that happens, I usually take my pillow and blanket and head out into the living room to watch Sundance or anything that looks independently made. I’m not a big fan of HBO & Lifetime crap - give me IFC or Sundance any given day. While I was scanning around for a movie to watch, I fell upon La Mission. In a short summary, it’s a cute love story and drama about people who live out in the Mission district of San Francisco. You see how one man struggles with the fact that his son is gay. There is one scene that really floored me - when the father literally beat up his son on the street. The two of them on the sidewalk...on the ground...fighting because the father found out his son is gay. The most interesting response when the father asked about a few “questionable” photos he found of his son kissing another boy was, “Yeah that’s right dad, I’m a faggot!” --As if he knew his father would call him that. Not only was he beaten up physically and emotionally by his own father, but he was also bullied by his peers, which is so surreal since it happens much too often.

Putting the movie aside and going straight into reality: what is it about people who get so outraged over something that has nothing to do with them? If it doesn’t affect you, then why do “you” care? The only way I can see someone being so outraged and against it would be a parent. Ok, so you want your son or daughter to live the "American dream", have a loving marriage with a few kids and a nice house with a white picket fence, yada yada yada yada. It’s a great dream...for you perhaps. It’s a great dream for anyone who is gay or lesbian too. Do they think that just because we’re gay and lesbian that we cannot have kids or a nice house? I nod and understand about what they mean, but they have to understand that their lifetime partner does not have to be the opposite sex. Is it the embarrassment of their child being a “faggot” - or is it their pride that gets in the way of their love and compassion as a parent? Is it religion that tells them that they’ll never see their child in the afterlife? Is that the main fear? Do they think God would cast their child away because he or she is gay? I’m always interested in learning about why some people are so against homosexuality ---especially those who have nothing to do with it and don't have anyone in their lives who are gay, but they choose to bash or mock people they don’t even know that are homosexual. 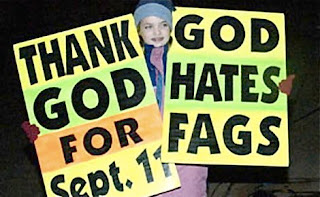 This is exactly the reason why I tumbled around with Christian fundamentalists in the past who insisted I was going to hell. Those very same people are the ones who would picket outside a soldier’s funeral with the most absurd signs such as, “God hates faggots”, “Thank God for dead soldiers”, and the most confusing one, “Thank God for 9/11”. What does 9/11 have to do with anyone being gay? What does it have to do with anything at all? I don’t understand how “religious” or “God serving” people can be so cruel and vicious. This is one of the main reasons why so many gays and lesbians have gone astray from their faith in God to either ‘just spiritual’ or perhaps even atheist. They’ve been told their religion or “GOD” doesn’t want them. And yeah, they have seen for themselves how “God’s own people” have treated them. So why should they be apart of any Christian organization? This truly breaks my heart because God loves all of us, gay, straight, bi, -- he made all of us so perfectly different -- different flowers in the same garden. These “Christians” almost had me renouncing my own religion at one point in my life. I was angry at God and drifted off into my own world. But thankfully, I found God again and my faith in Him is too strong to ever be taken down. 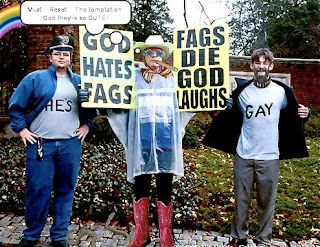 You always have to wonder about “Christians” who focus so much on homosexuality. Are they closet homos? I remember when I was much younger, before I came out of the closet, I would make fun of gay people just to convince my friends I wasn’t gay. I’d laugh at their gay jokes, hoping they wouldn’t see the lesbian in me. I wonder the same for those "Christians" who mock homosexuals. I also wonder the same about gay and lesbian atheists who focus so much on religious people. Are they secretly trying to find concrete answers to finding God or if God is real? I truly believe that’s the case: when gay and lesbian atheists dedicate their life to solely mocking religion or Christianity itself, (just like Christian gay bashers do) is it a hidden desire to really find out the truth? Is it the opposite of what they protest? Or is it simply a self-defense mechanism for everyone included, because they've all been hurt by these religious zealots and atheist homosexuals? Psychologically it makes sense, and in the same breath, it sounds so crazy.
For more of Deb's articles, please visit: www.debrapasquella.com
at January 08, 2011