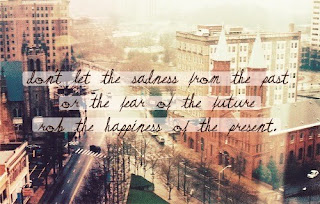 During this time of year, I’m pretty observant when it comes to people: what they say, how they act and of course, their actions overall. More people get depressed and there are plenty more suicides during the holiday season. Everything may appear to be “okay” on the surface, but inside they’re dying. Certain dates, loved ones passed and other negative triggers can leave someone feeling either bitter or sad. It’s so easy to say, “Well it’s just like any other time of the year” --but it really isn’t. There are too many “happy” memories of the past...key word: past. The holidays are no longer about happiness, but only the nostalgic memories of ‘a time when’. Some tend to get stuck into that time warp, leaving them with a sense of hopelessness that there will never be a holiday full of cheer, no one to love like once before and no more laughter while celebrating the New Year. “The New Year” - think about it. It’s a new year for a new future. It’s a new opportunity to jump into another chapter of your life. It’s a door opening, welcoming you into a new and hopeful future. The past is the past. Cherish the memories, but remember, everything you have ahead of you will be much better than what you had once before. It’s a state of mind that you have to adapt to in order to make life worth living again.

Sadly, a friend of mine lost her brother in an unfortunate car accident about a month ago. She’s having a hard time, especially now during the holidays and doesn’t know how to cope without him. They were best friends - never apart and always did everything together. She happens to be an atheist and told me that she feared not being able to be with him in the afterlife due to her lack of faith. Although I respect her enough not to push my religion on her, I told her what I believe would happen. I truly believe that God has given us the ‘burden’ of time ---for a very good reason. In “heaven”, or for some, the afterlife, there is no concept of time. I think of it like this: our deceased loved ones are up in heaven and waiting for us. For them, they’ve been told that they will see us in ten minutes. For us here on earth, ten minutes is equal to seventy years. Our time here is drawn out to the max, while up there, there’s no such thing as “a long time”. To us, it seems like forever. I also believe that God is an all forgiving God and it’s so easy to get lost in losing the faith due to so many bad things happening. “How can a “god” do this to us? How can he take away the people we love? It’s not logical.” No. It’s not logical because if it were, people would have figured out God and His plan a long, long time ago. Science and faith/spirituality do not go hand-in-hand. In fact, the more intelligent (book smart) one gets, the more debunking goes on; the more analyzing and proving that spirituality or perhaps, “God” is not real. Science will definitely give you concrete answers to ‘what’s not seen is to not be believed’. But when you think about it on a ‘higher realm’ other than science: God created science. Why would He have us figure it all out? He sees the bigger picture, while we only see a small scope of the meaning of life.

I can’t imagine what it’s like to lose a sibling God forbid, but knowing (by faith alone) I believe that the "ten minutes" that our deceased loved ones have to wait, is comforting in itself. If you can simply “choose” to go on and be happy --deliberately smile even when you don’t feel like it - it eventually comes naturally. Think about your life ten years ago. Now think about how fast time flew. Life is way too short to mourn for too long. I’m not saying not to grieve for someone, I’m just pointing out that there is a bigger picture to this thing called life.
For more of Deb's articles, please visit: www.debrapasquella.com
Debra Pasquella deceased loved ones sad during the holidays suicides