It Works Both Ways: Recovering From a Broken Heart 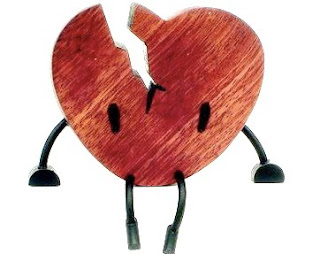 There came a time in my life when I realized that some of the people I trusted with all my heart were absolute frauds. I turned bitter and skeptic of everyone who had entered my life thereafter. Within that period of skepticism and doubt, I then realized something else: people are only human. We all are human, we make mistakes, we say things that sometimes don’t line up with our actions. We’re not perfect. The higher my expectations were for the people who were in my life, the more disappointments came flying my way. I would isolate myself and basically befriend those who were “safe” -- like people from across the nation or I would hang around my family more (which is never a bad thing). My circle of friends became less and less and when I delved in deeper into understanding human behavior as well as understanding my own flaws, I took into consideration that yes -- maybe every single person in my life will betray me, hurt me or disappoint me at some point, but in life, that’s the risk in anything or anyone you come across. For instance, you land a great job. Risk: you lose it. Same with people.

Let me ask you this... In your memory file inside your mind, do you remember anyone telling you sincerely, “I would never hurt or betray you. You can trust me”, and as they’re telling you this, they have the most sincere tone and look in their eyes? And maybe months or even years later, this very person does the one thing you would have never thought possible. It’s quite a pill to swallow and sometimes, it’s the most hardest thing to recover from: being betrayed from someone you trusted most. As I have said in my previous post, forgiving “should” go hand-in-hand with forgetting, but our minds, as human beings, as faulty as we are --how can we forget? I used to be a big believer in forgiving and forgetting, but that second part, I. just. can’t. forget. So many people chime in with their advice, “Get over it” and you just give them a look as if they’ve lost all sensitivity whatsoever. I’ve even said that to a few of my friends after harping over a lost friendship or relationship. Again and again they’d tell their story and I would sit there and blurt out: “Get over it!” Easier said. There’s an “educated guess” about how long it takes to get over someone. So, if you were with the person for two years, your estimated time of recovery is one year. So whatever the time length, cut it in half, “they say”. I think it’s bullshit. I think every single one of us deals with emotional grief in various ways. The heart is a fickle thing. I believe most memories are stored in our hearts. We tend to focus more on the good because let’s face it, just thinking about the bad times actually makes us go through it again.

Especially with friends, my heart seems to never heal. It’s like losing a friend to death, yet they’re still out there choosing not to talk to you due to bitterness and resentment. When is it time to just let go? (For both people.) When we’re sitting inside a deep lull in lives and those thoughts come trickling in unexpectedly, do we entertain them or do we brush them aside and try to ignore our own minds and hearts? I have a few friends who have lost their parents, including Madelene. Years and years go by and still, their hearts are much too heavy on certain days. They never truly get over the loss. Something is always there to remind them or spark a memory, whether through a song, through something someone said or maybe finding an old photo. How do you tell your heart to stop? How do you make the memories disappear? And, if the person you can’t get over is still alive, how do you reconnect and take away all the pain, grief and bitterness and replace it with trust, love and laughter? I truly believe that life’s too short to waste on bitterness. The relief you can give to somebody who has hurt you is to forgive them. Whether or not you choose to (or are able to) forget is just something out of our control. But once forgiveness sets in, you're not only giving relief and peace to the offender, but you’re giving relief and peace to yourself. It works both ways.
For more of Deb's articles, please visit: www.debrapasquella.com
Debra Pasquella forgiveness heartbreak relationships