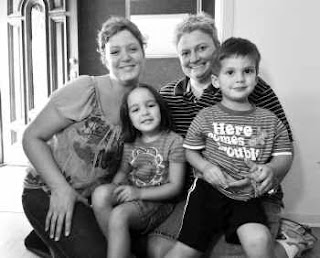 The other day while watching the news, I saw a heartbreaking story about a lesbian couple, Jill & Tracy Harrison, who wanted to enroll their daughter into a Christian pre-school, however they were rejected because they’re lesbian parents. The standard principle of St. Vincent School is “in matters of marriage and outside the marriage”, therefore rejecting their 4 year old child.

"St. Vincent's School as a ministry of St. Vincent's Cathedral upholds the clear teaching of the Christian faith, the Holy Bible, and the Anglican Church in North America," the Rev. Ryan Reed said. "We based our decisions about enrollment on what is best for the children of St. Vincent's as a whole and in conformity with the above standards," he said. "We regret the disappointment the mother feels, but also do not understand why she would want to enroll her child in a school that would undercut her own personal values at home."

Undercut her personal values? What I would like to see is every single staff member, teacher, principal and yes, even the custodian get privately investigated for any “immoral” behavior outside the workplace. Has anyone been divorced and then remarried while having their ex-spouse still alive? That’s an abomination right there, because technically in the Bible it’s considered adultery. Are there any single parents? Are there any parents indulging in alcohol or drugs from time to time? Has any one of the staff members had an affair? Has anyone had premarital sex? Has anyone used the Lord’s name in vain? Point is: can any one of these people throw the first stone? I don’t believe so. Everyone is flawed within the Christian religion, however at the same time, made to perfection in God’s eyes. What makes another person who is also a “sinner”, judge so harshly? If they simply go by Leviticus alone, it clearly stated that eating shellfish or a man shaving his beard will surely go to hell. Even Romans and other books of the bible describe homosexuality as "promiscuity", but they are not speaking about a loving relationship between two people. The bible clearly states the dangers “sexual sin”. Even premarital sex between heterosexuals is a sin. Why can’t people of every lifestyle and “sin” congregate together as one and worship their God without the judgments of others? Isn’t that what church is all about? Didn’t Jesus spend his time and surround himself with “sinners” and immoral people of this world? Why isn’t this “Christian” church - a church that instills the teachings of Jesus, setting an example? Would Jesus turn away a 4 year old child just because her parents, who happen to be women are lesbians?

Here are some scriptures that may help reinforce some teachings of Jesus and what the Bible clearly states:

Okay, but it also states that man should not eat crustaceans of the sea (shellfish), or shave his beard, for that is also an abomination to God. Again, is everyone going to hell? These scriptures are the old law that no longer applies to Christians.

Relying on Jesus’ sacrifice is why love between two people is not wrong. The old Law no longer binds us. He died for us so that we no longer are bound by the old law, that we can have peace knowing that God accepts us. The biggest commandment is to love God with all your heart, and to also love others as you would yourself. Ah, the golden rule. It’s so hard for super-duper hyped up Christians to follow. It’s no wonder so many of my gay and lesbian friends have turned from Christianity due to other people criticizing their lives so much. I’m just glad I can be there for people who have lost hope in Christianity and to let them know how loved they are by God. How important they are to God and that whomever they love, is also a blessing by God.

This last scripture will also prove that whether male or female, we are all part of God's plan:

“Let me put it in another way. The law was our guardian and teacher to lead us until Christ came. So now, through faith in Christ, we are made right with God. But now that faith in Christ has come, we no longer need the law as our guardian. So you are all children of God through faith in Christ Jesus. And all who have been united with Christ in baptism have been made like him. There is no longer Jew or Gentile, slave or free, male or female. For you are ALL Christians—you are one in Christ Jesus. And now that you belong to Christ, you are the true children of Abraham. You are his heirs, and now all the promises God gave to him belong to you.” ~Galatians 3:24-29