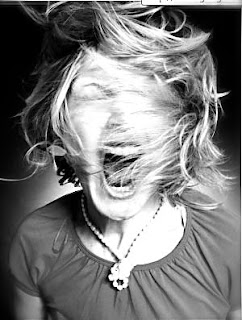 Insecurity does funny things to us, doesn’t it? I came across a scenario that really made my head spin yesterday. I had critiqued a comedienne's work, and I’ve been known to be a bit ‘too honest’ sometimes, and this one particular person didn’t handle it very well. In fact, she had written me a very angry email, and in one part of it, trying to validate what a "good person" she was. Sometimes, when people are in the business of art and entertainment, they forget to bring the most important thing: a thick skin.
Here’s her response word for word when I told her that I didn’t find her comedy funny:
“i can’t believe you were so hurtful and then PERSONALLY attacked my WORK?@??!!? i work in CHARITY LADY - ANIMAL RESCUE - SERIOUS CAMPAIGNING HELPING THE EARTH!!!!!!!!!!!!!!”

Ok, fine, but your comedy isn’t funny. I’m not trying to viciously hurt her, I’m just being honest. In fact, her performance always has a key giveaway: a silent crowd. She may be a good person who gives to charity, rescues animals & saves the earth one tree at a time, but she is not in the least bit funny in my opinion. Most people who give to charity don't brag about it if it's on a genuine level. But I digress... If she told me, “I hate your writing and I don't particularly find it interesting”, I would just say, “Well, it’s not for everyone.” My point is, the fact that she listed all of her "good qualities" in such an angry tone, screamed out, “I’M INSECURE LADY!” And you know what? So am I...so am I... But I have one thing that she doesn’t: a thick skin.
a thick skin comedy business Debra Pasquella insecurity issues Marilyn Monroe quote stand up comedy