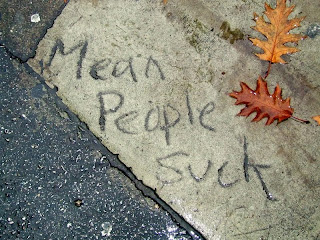 Lately I’m finding that I’ve become much more cynical and pessimistic toward people. I’m much more leery of people. I understand that everybody has a motive for something or other in this life, but there are some people whose motives are purely taken out and taken out upon other people. Maybe it’s the sake for mere entertainment or it’s some sort of pent up aggression of some sort that mentally and physically vomits self-absorbed absurdness. Don’t get me wrong, I can be a bitch and a half, but some people’s behavior really baffles me sometimes.

As I was reaching up trying to grab one of the last Saucy Susans in the grocery store (because I dowse everything in that stuff), I overheard someone asking one of the employees what aisle their Duraflame logs were. The clerk gladly gave them the information and explained that although it’s usually in that aisle, they had ran out because they sold out quicker than expected. The woman asked if he could check the back to see if he had another box lying around somewhere, but the clerk explained that he knew there wasn’t. This didn’t sit well with the lady and she said, “Well it’s not like you’re an over achiever in the line of work you do, so I wouldn’t expect you to go above and beyond your duty.” I. wanted. to. strangle. her. How dare she insult this hard working kid - and yes - he was a kid, probably right out of high school trying to make a buck or two. There are some kids who don’t work and rely on mommy and daddy to supply them with everything. This woman really pissed me off. She looked like one of those wealthy housewives who hadn’t had to lift a hand other than to get a manicure done. But my question is: why? Why are people so mean to other people? Why are they so cruel and so quick to bite back so hard? This kid did nothing other than to explain that the store had ran out. She should have thanked him for the information and of course...moved on.

We have this Italian restaurant nearby where Madelene and I grab food from to bring home. It’s nice to sit at the bar and eat there too, but most of the time, we’re more cozier at home. Anyway, while picking up our food, another man was waiting for his takeout as well. We were both sitting at the bar patiently. All of the cooks and the help in that restaurant are Mexican. Now let me tell you - I have seen the former Italian cooks and these Mexican guys can cook helluva’ lot better than them. Anyway, the chef came out with his little white get up and asked the bartender a question about the guy’s order. The man perked up and asked, “Are you cooking my food?” And the chef looked puzzled and scared and said, “Yes sir,” in a very heavy Spanish accent. Well, this man went off about how awful it was to be spending money on Italian food when it was clearly made by Mexicans. Then he went into a whole other issue about how wrong it is to stay in a country and not learn the English language fluently. I. wanted. to. strangle. him. Not because I have known the chef since forever (and ever since he was a busboy), but because it was so disgusting on his part. This guy worked his way up from busyboy, to waiter and then learned how to make the food even better than the former chefs who went to school for it. The man paid his tab and of course...moved on.

I seem to always encounter these little interactions with people and wonder how they hell they were brought up. How can you just treat someone like absolute pure shit and then live with yourself afterward? Some people hold very strong opinions about some things, but keep them to yourself in public and stop showing your fecking ugliness to the world. It’s disgusting to see people treating others like this. There was one time I went off on a woman because she was in a Korean farm market yelling at the cashier who was ringing her up. There were two women standing in front of me. One was checking out her produce. She was a large, say 6 foot tall and big all around, and the other woman behind her was about 4’11, skinny and fragile looking. I see this behemoth-looking woman fumbling in her purse for her wallet. She pulls out an American Express card.

“Ah, no, we don’t accept that here.”
“Well you used to!” the behemoth blurts out. Now mind you I’ve been coming to this market since it opened and they never once took American Express. They’ve had the same machine there for years.
“So you don’t take American Express anymore?”
The cute little Korean guy looks down, frustrated that his words weren’t understood, possibly taking too long, when the woman starts getting angrier.
“Huuuuuuuuullllllllllooooooooooooooo?” she says, as though he was some idiot.

Deb’s temper rises. I was fuming over the way she made this cute little man feel like a pile of shit.

“I’m not sure if you heard him or not, but he doesn’t take American Express, never has, and not once since this place opened have they taken a card that is hardly accepted anywhere.” I said…hoping I wouldn’t be eaten.
“Well they should have a damn sign that says that!”

“Maybe if you opened your eyes ma'am, you’ll see the bright yellow sign that tells you what they do accept. They also don’t accept Monopoly money, however, they didn’t list that as things they ‘don’t’ accept.” I replied, in a very calm and creepy tone.  I’m still waiting for this woman to take a bite of my left shoulder at this point. She throws some fresh cash on the counter that looks like it’s just been spit out of an ATM machine and grumbles a few obscenities at the Korean guy and me and then waddles out of the store furiously. When my turn came, I plopped my 2lbs of salmon on the counter and said, “Tough crowd tonight, huh?”

There are times where you have to stand up for people and times where you just have to keep your mouth shut. But that one incident, I couldn’t help but tell this woman off....and then of course, I moved on.
Debra Pasquella mean people mean people suck rude people