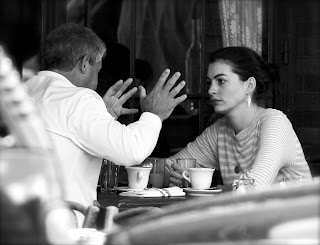 It’s been quite a week. Madelene got two days in a row off, which was definitely needed. Between working on projects together and spending time talking like two best friends for hours over coffee, I got to know my partner of 14 years a little bit more. I’ve always kept in mind that no matter how long you have been with someone, you cannot know them 100%, as one would like to think they do. It’s impossible. People are so complex, full of deep desires, aspirations and secretive treasures that perhaps they want to keep to themselves. It’s our right as humans. Yesterday, I learned a lot about my best friend. We stopped by at a nearby diner and spend some time talking over coffee. We had a conversation about people who simply don’t listen, yet talk your ear off about themselves only. I then told her stories of past dates before Madelene, and how some dates would ramble on and on about themselves - it was an all out “me me me” fest. These types of people will cut you off in order to get another “me me me” comment in. Maybe I’m being too harsh. Maybe people who ramble on endlessly have no clue. Maybe...I do this?

The waitress walked over to the other end of the counter with her pot of coffee and gave me a refill, and then asked, “Do you want something to eat?” I thought to myself, waitresses ask questions to other people all the time. It’s never what they would like to eat or drink, it’s always about the other person, but then again it’s their job. In some way, that has to trickle over into their personal lives. Even being a salesperson, sometimes you automatically put on that “bright & shiny smile” in your personal life when it really isn’t necessary - it’s just become a habit now. Questioning my own “me me me” fests, and realizing how much Madelene has been helping me with my own projects and passions, I had asked her something important. I had asked her what her passions were, and if there weren’t any obstacles in the way to obtain this passion(s) or dream job(s) - what would they be?

She looked at me, immediately blurting out, “I’d love to be a rescue diver. I want to help people. I’d also would love to be someone who trains dolphins.” I jerked my head back a little, thinking she wanted to do something more in the arts, but then again, that’s probably a “me me me” thought. Madelene is at her happiest when she is near water- preferably the ocean or bay, but I never once thought she’d want to be in an aqua crime scene. I reminded her that bodies under water are much different than the ones that are on land. I didn’t elaborate further than that. Not to diminish her dreams, but I know she gets a little squeamish when I watch autopsies and crime scene shows on the Discovery Channel. So, I learned a little more about Madelene yesterday, and I plan on discovering much more little treasures down the road as well.

Even while interviewing people for the documentary, it’s especially important to ask the questions clearly, and then just “listen”----in complete silence. Not a word, not a peep - just hearing the person answer your question to the maximum length that they can possibly muster up. It’s also important that when they’re “seemingly” done telling their elaborated answers, to wait a little longer, because a thought will then trigger, making them talk even more. But if you think about it, the same applies to the people in our lives. Try it out. Ask them a question, say nothing, and then after they have answered you, wait a little while longer before speaking. It’ll be a bit challenging trying this at a family function while people are continually talking over one another, but try it with a friend or spouse while you two are out for lunch or just hanging out. It’s interesting. People love talking about themselves, which is why people who are there to “listen” become treasured friends. People need to be heard, but then again, people aren’t made to be full fledged psychiatrists either. Everything in moderation of course.