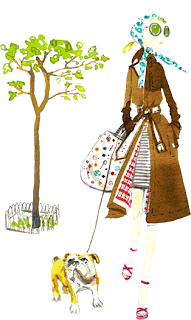 I’m truly amazed of how well my neighbor downstairs is interacting with the other neighbors. She is playing very nicely in the sandbox these last couple of days, and mingling with other dog owners, as well as non-dog owners. She is constantly outside with her little pup - possibly an excuse to come out of her shell.   As I walked downstairs to head off to the gym, there she was, sitting on the lawn, smiling and greeting me. Again, I knelt down besides her and pet the cute little dog with the sharp teeth...and once again, I could not help but stare at her feet that were in the same surf boards--err--flip flops as they were the other day when I had seen her. My mother advised me to not be rude and stare at her feet because she’s probably self-conscious, but I just couldn’t help it. It was like not looking at the 5 inch inch lady at the circus. Impossible.

One evening, we had a huge power surge within the entire community. The electricity went out and our power box beside our building sparked up and fizzled out. It was a full moon which lit up the entire neighborhood. Odd thing was, since it was such a beautiful night, all of our neighbors decided to take a step outside. Once again, Miss Social Butterfly was out and about with her dog mingling...again on her surf boards.  Hell, she can practically ski with her flip-flops on. Since it was dark, I doubt I would see her gigantic feet, until I said hello to her. She unfortunately held her flashlight toward the ground - toward her feet. The only thing that glowed from below...were the very things I was not supposed to stare at.

I believe she is a teacher, because every summer she is home during the day. She looks bored out of her mind. I’m about to head off to the gym and she’s outside right now. She’s still very limited on ‘chit-chatting’, but you can see the anticipation when people walk up to her. I think today I’ll bite the bullet and ask Miss Social Butterfly (as well as her dog) if she’d like to join me to walk around the complex. I hope her strides aren’t as big as I’m assuming they’ll be.
big feet Debra Pasquella dogs getting along with the neighbors