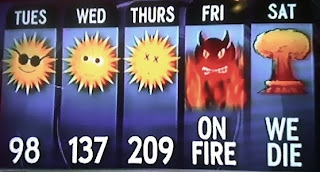 It’s another hot day in New York. It feels like a sauna outside and luckily for me, my a/c in my car decided to stop working. Technology has spoiled us, leaving us to think that we need a/c units for us to stay alive, and when a bit of humidity falls upon us like split pea soup, we’re gasping for air in hopes that we won’t soon be pushing up daisies. When I woke up, I got excited because I saw that it was overcast. I thought it might have cooled things down a touch, until I stepped outside and realized it was still as thick as molasses. I don’t do heat, more so, humidity. Give me a 90 degree day with no humidity and take my damn ass to the beach. I’m ready to go.

It’s not only the hot and humid days that get to me - it’s how it affects other people. For instance, yesterday late afternoon, I had stopped into our local farm market to pick up a few things. There was a long line of people waiting ahead of me. Each person who went up to the counter and plopped their produce down had a bone to pick with the nice little Korean man who really couldn't speak a lick of English, other than, “thank you”, and “goodbye”, as well as the total price.  Personally, I think these guys know English very well, but choose not to deal with mean New Yorkers. Smart. By the fifth customer, he somehow just nodded, letting them believe he really didn’t know how to speak any English whatsoever - even pointing to the total price to prove his inability to communicate with them. He was tired, hot and irritated by all of the cranky people. When it was my turn for him to ring me up, I told him, “Sometimes I wish I didn’t know English in order to keep my sanity from mean people”, and then looked down, grabbing each fruit out of my little cart and placing them out on the countertop. All of the sudden I hear, “I see you all da’ time here! Glad you come! You no buy sushi lately from us, why? Is every-ting ok?” I looked up at him, smiled and said, “You’re a genius.”

As I’m walking toward my apartment building, I noticed two crowds of people, possibly each being a family. On one side were four black women, maybe late twenties to early thirties and a teenage boy with them. On the other side were three Hispanic women, approximately the same age and two other men that were probably in their mid-forties. They were adults, however, they were seemingly having a little spat. You can definitely see the groups were parted, so I just walked bravely in between them and made my way up the stairs to get to my apartment. After putting everything away, I went back into my office (closest to the parking lot) and heard the argument escalate. 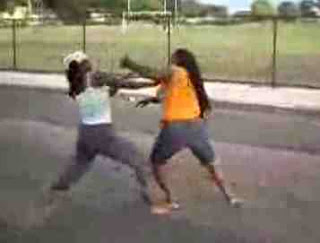 At that point, I bent one of the blades of my blinds down and looked outside. I saw one of the black woman start wiggling her head back and forth and her huge hooped earrings were flying from side to side. It was then...that she took off her huge wedged sandals. I knew she meant business. This is a weapon of all weapons - you better run if you see a girl take off her shoes. It doesn’t get better than this. I had the Jerry Springer, 'live', in my parking lot. I could have sold tickets. Of course a patrol came over and broke it up and everything went back to a peaceful and serene setting...somewhat.

So, another hot and humid day in New York means: Deb is going to tread gingerly through this lovely day of crankiness.
Please enjoy your day & stay out of New York!
cranky people Debra Pasquella hot and humid New York pea soup