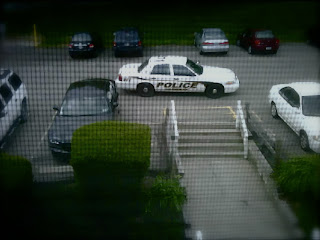 As some of you already know, our neighbors downstairs are quite loud and boisterous at times. Ever since they’ve put in hard wooden floors, they sound like two horses galloping around. We’ve recently learned that they’ve been having wars with the neighbors below them. I had heard her saying, “Well the neighbors don’t give a shit. Thank God they don’t live above us.” (Which indicated it was not us she was complaining about.) So as days went on, every 6am they would have a sound war. She would blast awful Michael Jackson music and the apartment beneath her would blast out really good club music - stuff that my wife and I would listen to. You gotta side with the people who like good music.

Anyway, this morning at 6am, I hear the neighbor below me blasting Amy Winehouse (which is much better than Michael Jackson), but so loud, that it sounded as though someone was using our stereo out in our very own living room. Then, we heard a blood curdling scream. That, woke us right up! We got nervous and I just looked over at Madelene and said, “This can’t be happening.” I wasn’t sure if someone was hurting her or if she was just having a complete meltdown. Her boyfriend hasn’t been around in days, so who was in the apartment with her at 6am? We heard loud banging and crying, as another song started to play.  We only heard her and nobody else.

I would have called the police but here’s my dilemma: is she having a meltdown because she is going through a breakup, so she blasted the music to drown out her cries?

But before I could make my decision, someone beat me to it.  A patrol car came racing into our parking area and two police officers came running upstairs. They banged on the door very loudly. I was peeking out my window and had seen my neighbor adjacent from me walk downstairs and “pretend” to get something out her car.  Then, more officers arrived and she had asked what was going on, but they couldn’t give her the full story.

So, it is 9:15 and they are still in the apartment for whatever reason. No bodies were taken out, nor was anyone arrested...so it seems. I’m guessing she had a complete nervous breakdown and they’re assisting her with whatever. God only knows. Now I feel bad for having sound wars with her, but the sad part was, she was really having sound wars with the neighbor under her, and a war within herself.
19th Nervous Breakdown apartment living breakups Debra Pasquella domestic abuse domestic disputes loud neighbors loud neighbors with hard wood floors nervous breakdown police