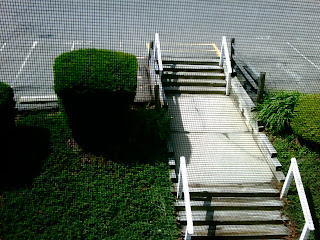 Ah, peace and quiet. That’s how it was from last night until this morning. (See previous post.) I thought it would be a good idea to leave a note on my neighbor's door in an envelope before I left to go out for the day. In the letter I had written, I had asked if she was ok and if she ever needed anything, to not hesitate to call or even come upstairs. I also indicated that I realized we have never met before, but I was really concerned because I thought she was getting robbed or God forbid, something worse. Figuring that the letter would defuse the 'war of the stereos', it would also give her a sense of neighborly kindness.  One would only assume...

At around 6pm I got a phone call from the boyfriend. Now, the letter was left more for the girl, because I was really concerned about her and the blood curdling scream. Her boyfriend has not been home in almost a week.

Here’s the conversation that the boyfriend and I had over the phone:

“Yeah hi, it’s Bobby from downstairs, how you doin’?”
“Hi Bobby, is everything ok? I just wanted to see if she was alright.”
“Yeah yeah - dingz’ are good. Da police came inside lookin’ for me yanno? Dey’ dought’ I did sumptin’ to her or sumptin, yanno?”
“Well, I heard the water go on and then a loud bang followed by a woman’s scream. I wasn’t sure if it was from your apartment or the next one over. Then I heard the police come inside. I hope everything’s ok...”
“Yeah yeah, you can hear everything ova’ here yanno? I hear you wake up every mornin’, I know wha' time you go to sleep, I know when you go to the baTRoom’, I know---”
“Yeah Bobby, the walls are thin, I know.”  I said, hoping he wouldn’t go on to say he heard us in bed as well.
“Well like I said, if you guys need anything, don’t hesitate to give us a call or come up...”
“Das' really nice of you -  das' really cool!  You too, yanno?”
“Ok then. Nice to hear from you, Bobby.” I said, hoping that this intelligent conversation would end quickly.
“Yeah yeah, you too.”
“Bye.”
“Bye.”

My question is: why is he calling me and not his girlfriend? He wasn’t the one screaming. In any event, he wasn’t even there for over a week. I know this for a fact. Also, why were the cops there for over three hours in her house? Something had to have happened. Well, it’s none of my business anyway, however I must say that it has been so extremely peaceful last night into this morning. Not a peep! She wasn’t even walking like a stallion. I heard her walking, but she was so pleasantly ~tip-toeing through the tulips~ that I had to just say: “thank you” under my breath as I was able to sleep in a little.
Debra Pasquella getting along with the neighbors neighborly love neighbors arguing neighbors fighting noisy neighbors