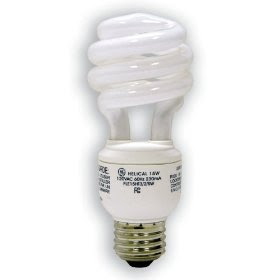 It’s Wednesday morning and Madelene just left to go work. It was a rough night. I slept out on the couch. After a nice dinner and a game of scrabble, I had to go to the bathroom. I noticed that when I turned on the light, it lit up white--not the golden glow our lighting usually gives off. This lighting reminded me of a rigid florescent classroom or a cold warehouse. It was disturbing. I came back out and asked about the new bulbs. She gave me the box to the rest of them and it said, “cool natural lights”. They were GE energy smart bulbs. They last for five years. They save you money of course.

I’m all for saving a buck or two, but I am not going to put up with weird funky lights that make my eyes blur. I quit drinking--that alone should save us a bundle.  Then I went to switch on our patio light which glows inside our living room.

It was a yellowish-green color.

On top of this putrid color, it had to warm up before getting to its potential brightness; much like a gymnasium lamp. I turned around silently and just stared at her, until the words, “You gotta be kidding me, right” muttered out.

Madelene’s color blind. I’m not being mean, but she thinks brown is gray and blue is green. We have to do the “outfit check” before she walks out the door. I don’t mind, I just want to help. Clearly, these bulbs were not the same bulbs we use. If anyone knows me, they know that my lighting in my home is so important. It has to have a warm glow. Even our big colonial-like windows have little candle lights (not real) on the windowpane glowing out so that the outside can enjoy my ambience too. Certain lights in the condo need to be turned on or off depending on what’s going on, who’s over or if I’m making dinner, etc. I’m big on lighting--always was since I was a little girl. My mom had to get me a special light that glowed a warmth in my bedroom that needed to be mounted to the wall. I’m that picky.

But back to the argument which led to camping out on the couch: she thought that I was insinuating she was “cheap”. If anything, Madelene is more than generous with whatever she has and isn’t afraid to spend. She’s “smart”---not cheap. But, to rule out any possibilities of financial woes, I said, “If you’re trying to save money by installing these bulbs, we can just eliminate a few movie channels.” Personally, I never watch movies. If I do watch television, I put on TCM for entertainment or network channels for news and so forth. I hardly watch television anymore, I read instead or try to do things with Madelene besides veg out in front of the tube like a zombie.

“You think I’m cheap!” Madelene screams out, insulted by the comments I made about the bulbs.
“No! I was just making an observation about the white lighting in there. It reminds me of a classroom or office.”
“But it says, ‘cool natural lighting’.” she says, thinking that’ll ease the pain.
“Cool means cold sometimes, which is how it feels.”
“It’s just as warm as the other bulbs we use.” she tries to convince me.
“No they’re not. Those bulbs are almost the same type of lighting my grandma had in her little kitchen in Brooklyn---those florescent twisty things on the ceilings that buzzed endlessly.”

Long story short: I grabbed an extra blanket, grabbed my two pillows, gave Madelene a sneer and headed for the couch. We both remained quiet for the rest of the night until the morning when we figured out that neither one of us got any sleep. We made up and we're now chatting on Facebook.

Now with the ice storm we’re getting hit with, I hope the lights don’t go out on me!
being green bulbs Debra Pasquella environmental GE energy smart