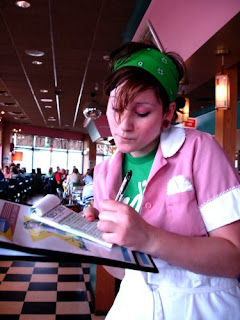 Can I blame everything on Mercury, or is it just my life being so ass-backwards lately that nothing is going my way? Evne my spelilng hsa been jsut awful lately. My editor swings back my work and slaps me in the face about five times before it gets submitted for publishing. I really should consider waitressing or acting. Even as a waitress, I’ve always sent the wrong food to the wrong table, gave them potato salad instead of cold slaw and always forgot to include their artery clogging tarter sauce with their fish and chips. God forbid the wrong check was tossed on the wrong table. All hell broke loose or I would get a wink from the truck driver who received the $1.00 bill for his ribeye. He’d always come back on Tuesdays with a twinkle in his eye. The poor guy always had a little schmutz on his scruffy beard and a flannel shirt that reeked of gasoline and motor oil. I always wondered if he had a wife and family at home.

After my waitressing days and officially done with school, I went into the corporate world to give it a shot. They were so unified and even had their own little language like, “report everything to human resources” or “team player” and my personal favorite, “liquid lunches”. Human resources were any reservations you had left in your body---not bunch of catty women chained to their cubicles handing out demerits and bringing on board scared little soldiers to join “their team”. “You have to be a team player!” they chanted to all who were hired...and of course, eventually fired. They would escort you out of the building with two security men wrapped in each arm of the fired victim like a prisoner. Everybody had their face pressed against the window to watch the humiliated employee see his or her last day in the office of doom.

There’s gotta be something better than this...
And there was...
So I thought...

A call center. A call center for a phone and internet company that seemed to be, ....normal? My interview was even fun. They gave personality tests over the phone. One person would be in the other room and call you up in the little office they provided you with. She tested me on how well I handled a customer. Cool! Here’s the thing: you had to be in the union. All I ever knew and was brainwashed to think in the corporate world was: THE UNION IS EVIL. This is because no company wants a union to take over and dictate. I thought it would be quite the change so I tried it. The training was intensive and the people were very friendly and helpful. Although there were very difficult technical things to learn, they made it fun and after three months, it just clicked. You got it. You were flowing and ready to take 100 calls per day if need be. 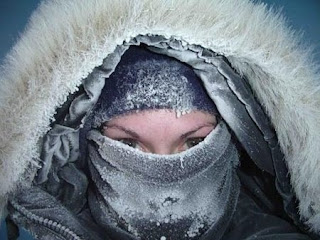 After a while, then you got to know the company. It’s as cultish as the typical corporate world, only with a personality. Every Thursday, the union people were “advised” (forced) to wear red. Basically, if you didn’t wear a red shirt on Thursdays, then you were the enemy or buddies with someone in management. They had meetings after work and then of course, good ol’ happy hour at the local watering hole to humanize us up. (That was my favorite part.) Come February, one bitterly cold winter, we were on strike. We had to stand out in several locations in zero degree weather. I had to go out and find a goose down jacket with fur and hunting gloves---basically stuff you get if you plan to vacation in Antarctica. We had to stand out there for ***4*** hours! I had to wear two huge signs on me held by two strings. One sign in the front said one thing and when I turned around, it said another. I looked like a huge triangle with legs. Utility trucks would pass by honking because they were union workers too. We got “the nod” of approval and support. My brother-in-law who is also in the union passed around coffee and hot chocolate to all who were out there striking.

When I got home on my 4th day of striking, I came down with pneumonia without pay. This wasn’t my gig. Management started playing musical chairs and we weren’t getting the same humanness that we were used to. I opted out and played the “step game”. Those of you who are in the union know what this is. If you are sick one day, then you are on one step. You are officially allowed to take the entire five working days off and still remain on step one. Step two is if you call in within the next three months, you get another “week off”. Step three is tricky. If you go on this step it means you either may get fired or just a huge warning. So, every three months, I’d take a week off. Company morale was down and so was my tolerance for the inhumane treatment we were getting.

My last day there, I remember it clearly. It was 9am and I had just put my headsets on and booted my computer so I could take the first crabby caller of the day. I was in a pretty good mood, had my fill of coffee and was ready to take on the world. All of the sudden, I kept getting dizzy spells. Everyone kept warning me about the window seat and how the tower next to it outside was cancer causing. This always stuck in my mind...but I pressed on. Then, another dizzy spell came on. I went to my supervisor and asked if I could just take a 15 minute break to get some orange juice or water because I felt like I was going to pass out.

So, I tried. I went back, put my headsets on and then, woke up to a bunch of EMT workers putting an oxygen mask on me and slipping me onto a gurney. I was carried out of there---not even escorted out by two security men arm-and-arm. I thought that would be most humiliating, until this happened.

After my past work experience in the cubicle world of hell, I decided to write for a living and work from home. It took me almost 4-5 years to even make a living from it. And although it’s not that much, it sure beats living in a cubicle pod chained to a desk.
corporate world Debra Pasquella strike union workers